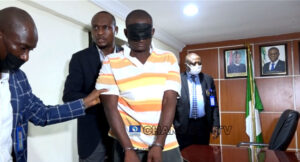 The BRT Driver, Andrew Nice Omininikoron, during the parade by police on Monday, March 7, 2022.

Police authorities in Lagos State have taken into custody the driver of the BRT Bus involved in the murder of 22-year-old fashion designer, Oluwabamise Ayanwole.

The driver, Andrew Nice Omininikoron, and another accomplice were arrested by DSS operatives in Ososa, Odogbolu area of Ogun State on Monday night. They were eventually handed over to the police.

The Commissioner of Police, Abiodun Alabi while parading the suspect on Monday explained that following the arrest, the investigation will be expanded to bring everyone who is part of the crime to justice.

The CP assured the public and the family of the bereaved victim that justice will be served in the case.

Alabi told Channels Television that the preliminary response from the suspect has not been satisfactory, but it has been established that he is a prime suspect in the incident that led to the death of the victim.

Speaking on the allegations of sexual assault and missing body parts, the CP said police officers and family members of the victim were all at the mortuary, and there was no part of the victim’s body that was mutilated.

He added that the post-mortem process has been initiated and the result will clarify if there was any form of sexual abuse on the victim.

YOU MAY ALSO LIKE:   Confession of a Slay Queen: I Have had Sex with more than 700 Men

He warned criminals in the state to desist from evil acts or face the wrath of the law.

“No crime will go undetected, and criminals will not go unpunished. The command has strengthened its security architecture and repositioned officers and men towards providing adequate and sustainable security for all and sundry in the state. This, we are confident, will prevent future occurrence of this sad incident,” the CP explained.

YOU MAY ALSO LIKE:   “We don’t need a dating app” – Leke Adeboye reacts to launch of RCCG’s Christian dating platform

Ayanwole went missing on Saturday, February 26, while returning to Ota from Ajah. She boarded a BRT bus with number 240257 going to Oshodi at about 7 p.m. at Chevron Bus-Stop.

Until her death, she worked as a fashion designer at Chevron Estate in Ajah, Lagos, but spent the weekends at Ota, Ogun state, with her sister.

Sadly, her body was found dumped by the roadside, and an unidentified man reportedly informed officials of Ebute Ero Police Station on Saturday evening.

Her body has since been deposited at the Mainland Hospital Mortuary, Yaba for autopsy.