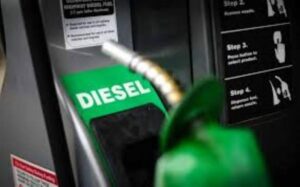 Nigerians on social media have expressed displeasure over the current price of automotive gas oil, also known as diesel.
Naija News understands that the price of diesel has skyrocketed across the country with some filling stations now selling at N625 per litre.

According to TheCable, this is four percent higher than the N540/litre it sold last week — and about a 30 percent increase in the two weeks.

The development is coming amid fears that the United States and its European allies will ban imports of Russian crude.

Reacting to the development, some Nigerians lamented the hardship skyrocketed price would cause for the average Nigerian, while others blamed the government inability to make sustainable future plans.

One Instagram user, maestro_makeover wrote; “This is what happens when a country doesn’t plan for the future. If our refineries were all working perfectly, this wouldn’t affect us. It is well”
One the_kk_collections wrote; “Nothing in this country is working. Like nothing at all and it’s so sad
How are people expected to cope?”
liz_world25_ wrote; “Things are getting worse everyday… Nigeria my country … No wonder Nigerians in Ukraine 🇺🇦 doesn’t want to come home.”
One wrote; king_adonii wrote; ‘Nigeria is not ready for hyper inflation coming’
One majinfotek_ng wrote; ”Oh my God ! Father have your way! From food to gas to petrol now diesel”
It would be recalled that on Monday, March 7, global oil prices hit their highest level since 2008 at over $130 a barrel before pulling back to trade around $120 a barrel.