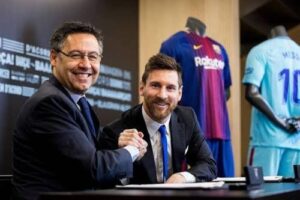 Barcelona president Joan Laporta says he hoped Lionel Messi would stay at the club and “play for free”.

Messi, 34, left for Paris St-Germain in August after Barcelona were unable to renew his contract because of La Liga’s salary limits.

The Argentine, who won 10 league titles with the Catalan giants, had to leave despite agreeing a deal worth 50% of his previous contract.

“There was disappointment on both sides,” Laporta said.

“I hoped Messi would do a U-turn and he would say he would play for free,” he added in an interview with Catalan radio station RAC1.

“I would have liked that and I would have been all for it. It is my understanding La Liga would have accepted it. But we cannot ask a player of Messi’s stature to do this.”

Laporta reiterated that Messi signing a new deal would have put the club “at risk”.

YOU MAY ALSO LIKE:   Ize-Iyamu: When God's Grace Is Upon a Man by Tunji Fagbohun

Messi famously broke down in tears at a news conference as his departure was announced.

“I asked him if he trusted the team and he said, ‘Of course I trust them. I need to get the injured players back’. He wants to continue at all costs and show this team is competitive.”

YOU MAY ALSO LIKE:   BREAKING: US Govt prepares 6,700 page documentary evidence for Abba Kyari’s
Barca president hoped Messi would ‘play for free’ before leaving for PSG 2021-10-08
Oluwasegun Adesuyi
Share