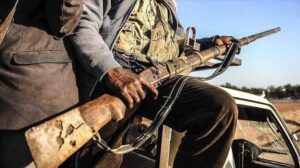 Five kidnapped students of the Baptist High school in Kaduna have been released by Bandits.

The students alongside a matron were released on Friday evening.

A statement signed by the Rev. Dr. Israel Adelani Akanji, President of the Nigerian Baptist Convention confirmed the development.

“Five of our Bethel Baptist High School students and the Matron (Making 6) have just been released to us this evening, October 8. We thank God and trust that the remaining four students will also be released.”