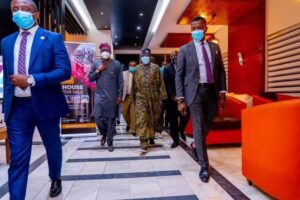 The National Leader of the All Progressives Congress, Bola Tinubu, has returned to Nigeria after been away from the country due to medical issues.

The former Governor of Lagos State had taken a medical break to London, the United Kingdom.

Tinubu returned to the country on Friday around 9 pm in a private jet and was driven to his Bourdilon residence in a convoy.

It was gathered that Tinubu was received at the Murtala Muhammed International Airport, by the governor of Lagos State, Babajide Sanwo-Olu.

It was reported that plans to welcome the former Governor were cancelled due to Tinubu’s inability to stand the rigours of a physical rally.

There has been speculation that the APC leader has intentions to take over power from President Muhammadu Buhari when his tenure ends in 2023.

Tinubu while in London had received both politicians and prominent persons at his residence, with some showing their solidarity and charging him to contest in the general election.

YOU MAY ALSO LIKE:   Lalong Re-Imposes 24-Hour Curfew In Jos Communities
Bola Tinubu Returns Back To Nigeria After Long Medical Break In London 2021-10-09
Oluwasegun Adesuyi
Share