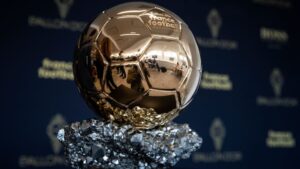 A 30-man list of top footballers with a chance of winning the 2021 Ballon d’Or award has been unveiled on Friday.
The list was unveiled in a series of social media posts by organizers of the prestigious award, France Football on Friday.

Naija News reports that the list is made up of one goalkeeper, five defenders, nine midfielders, and 15 forwards.

However, many observers have said the eventual winner will likely emerge from the trio of Cristiano Ronaldo, Lionel Messi, and Robert Lewandowski.

Already, Messi has won the award six times while his eternal rival, Ronaldo has won the award five times and so will be looking at scooping it this time around to go level on numbers with the Argentine forward.

However, the award may still go the way of Lewandowski.

Below is the full list of the 30 footballers shortlisted for this year’s Ballon d’Or.

YOU MAY ALSO LIKE:   BREAKING: EFCC arrests Bukola Saraki

The list will be screened until an eventual winner emerges.