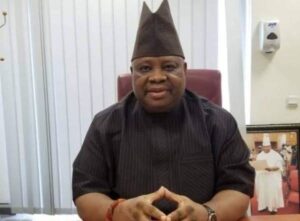 The Osun State Chapter of the All Progressives Congress, APC, has described as a pity to see the Peoples Democratic Party (PDP) parade, Senator Ademola Adeleke, as their trusted candidate.

According to the nation’s ruling party, the candidate in the 2019 gubernatorial election has nothing to offer the people of the State other than drawbacks and fake promises.

The APC stated this while reacting to the statement credited to Senator Adeleke when he visited Ooni of Ife, Adeyeye Ogunwusi on Wednesday.

The senator was quoted to have promised to make his private jet available for travelling by the Ooni of Ife, Oba Adeyeye Ogunwusi, Ojaja II.

Adeleke reportedly said this during a visit to the monarch’s palace during the week. The politician according to reports, also assured he will make all Ooni’s local and international trips easier.

APC has, however, in the statement signed by Kunle Oyatomi, the party’s Director of Publicity, Research and Strategy, described Senator Adeleke as a disgrace to his family and party for insulting the revered monarch.

He said: “It is ridiculous, pedestrian and complete lack of understanding on how a government runs. Lagos State government with its humongous revenue never considered a private jet and helicopter for Oba Akiolu of Lagos.

“Ooni Ogunwusi, as a young successful entrepreneur knows what it takes to have a private jet and should neither be deceived nor insulted by anyone. He can comfortably afford a jet if he so wishes.

“It is now obvious and glaring to the people of Osun that the Peoples Democratic Party (PDP) has no quality aspirants except welfare parasites, treasury looters and harbinger of lazy people without nothing to offer the good people of the state. If Ademola Adeleke is being paraded as a candidate, it is a pity,” Oyatomi stressed.

YOU MAY ALSO LIKE:   Buhari’s Call Fails To Lift Super Eagles As Nigeria Crashes Out Of AFCON

Oyatomi observed that Adeleke’s statement had exposed the PDP aspirant as a misfit and economic illiterate.

While demanding to know how Senator Ademola Adeleke would buy the private jet as a gift to the royal father, the APC asked if he will approach his elder brother Deji Adeleke for use of his personal funds. He added: “Has he provided one for the Timi of Edeland? How many royal fathers will he give private jets? How much has the Adeleke family provided for the repair of Ede roads and the uplifting of the people of his community?

YOU MAY ALSO LIKE:   2Face Idibia accused Me of sleeping with his wife - Brymo

While assuring that Osun will never again return to the PDP era of insecurity, treasury looting and underdevelopment, Oyatomi added that Adeleke was welcome to the 2022 guber race since he was desirous to waste more family funds.

Meanwhile, Ooni of Ife has in a statement released earlier, described as mere rumours the reports that Senator Ademola Adeleke had promised to buy him a private jet.

According to the Yoruba monarch, some individuals had only twisted the politician’s comment due to their hidden intentions, including to drag the respected stool of the Ooni in the mud.

Previous See Full List Of 30 Players Shortlisted For 2021 Ballon d’Or
Next Why Osinbajo, Fashola And I Didn’t Visit Tinubu In London – Aregbesola