‘Be Patient While We Fight FG’ – UniAbuja ASUU Tells Students 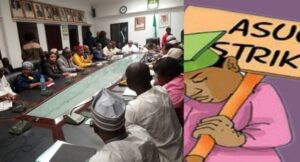 The University of Abuja branch of the Academic Staff Union of Universities (ASUU) said the Federal Government has not acceded to any of their demands to bring an end to the ongoing strike by the union.

They challenged the government to mention anything they had done to that effect.

The UniAbuja ASUU chairman, Dr. Kassim Umaru, stated this in an interview with members of the press at the end of its Congress held at the University’s Mini Campus in Gwagwalada.

“As far as we are concerned, the federal government has not done anything to our various demands.

Umar added that the Congress deliberated on matters pertaining to the strike and decided to reject the offer made by the federal government, saying that the National Executive Council would meet at the end of the four weeks ultimatum to make a decision.

Speaking on reports circulating that the federal government had approved another N100 billion for the university unions as part of the 2009 agreement, Umaru said no official document had been given to ASUU to that effect.

He also urged students to be patient as the strike was for their good as well.

“Is there any document to our union? We should begin to ask them these questions.

“The students will have to be patient, it is a fight we have to do once and for all and it is a fight for the future of unborn children. We have no alternative than to do what we are doing and we must do it so that we can compete with the external world,” he said.