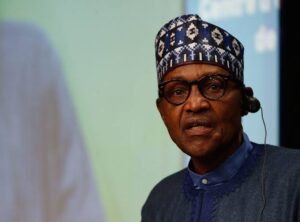 President Muhammadu Buhari-led government has directed Nigerians in Ukraine to remain calm but very vigilant and be responsible for their own security and safety as the country is being attacked by Russia.
The Federal Government in a statement released by Nigerian Embassy, in Kiev, charged Nigerians who don’t feel safe in the country to temporarily relocate to anywhere considered safe by private arrangement.

This is coming at a time Russian troops launched attacks on its neighbour, Ukraine despite sanctions from world leaders.

The Embassy advised Nigerians resident in Ukraine to ensure that they validate all their resident documents for ease of return to the country when desired.

The statement sighted by Naija News states, “The attention of the Embassy has been drawn to the declaration of state of emergency and Martial law on the entire territory of Ukraine except the Donestsk and Luhansk regions by the government of Ukraine, effective from midnight of February 23, 2022, for a period of 30 days, as well as the latest development on the Ukraine-Russia crises.

“Given development, the embassy urges Nigerian Nationals resident in Ukraine to remain calm but very vigilant and be responsible for their security and safety.

“The embassy wishes to add that should any Nigerian National consider the situation as emotionally disturbing, such National may temporarily relocate to anywhere considered safe by private arrangement. They should, however, ensure that they do all the needful to validate all their resident documents for ease of return to the country when desired.

YOU MAY ALSO LIKE:   2023: Sowore Blasts Babangida over endorsement of Osinbajo for president

“Students seeking temporary relocation are enjoined to seek proper clearance and guarantee form from their respective institutions during this period.

“For those who are still considering it appropriate to remain in the country, be rest assured that the embassy remains open for its consular duties and responsibilities at all times.”

YOU MAY ALSO LIKE:   APC Primary: Tinubu Raises Alarm Over Viral Text Message Being Sent To Delegates On Alleged Muslim-Muslim Ticket Plans
Be Responsible For Your Own Safety – Nigerian Govt Advise Citizens In Ukraine 2022-02-24
Oluwasegun Adesuyi
Share