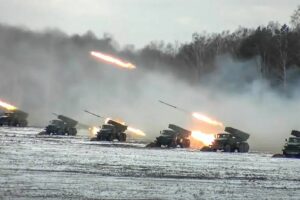 The clash between Russia and Ukraine on Thursday recorded at least six casualties.
Reports obtained by Naija News confirmed that a bomb exploded today in the southern Odesa region, injuring no fewer than seven people.

The bombing was confirmed to newsmen in a statement credited to Ukraine’s General Office of the National Police.

This is the first casualties to be announced in the city of Podolsk as Russian forces continue military operations in Ukraine.

Conditions on the seven people injured in the bombing are not yet clear, there are 19 people unaccounted for as at the time this report is given.

NBC News had reported earlier that a loud explosion was heard in the central capital of Kyiv and the northeast city of Kharkiv.

The development reportedly occurred a few minutes after Putin’s announcement.

The attacks ended hopes for a diplomatic solution that the United States and its allies had been attempting for weeks.

Prior to Putin’s announcement, Ukraine’s President Zelenskyy said he tried to call the Russian leader but was rebuffed, Naija News learnt.

Meanwhile, United States of America President Joe Biden has condemned the military attack and invasion of Ukraine by Russia.

Naija News earlier reported that Russia on Thursday morning announced that it has destroyed Ukrainian military airbases and its air defence systems.

In a statement issued by Russia’s Defence Ministry, the government added that Kyiv’s air defence systems were also “eliminated” in the attack.

This is coming hours after Russian President Vladimir Putin launched a military offensive against Ukraine to defend separatists in the east of the country.

In a statement released by the White House after the attack on Ukraine, US President said the world will hold President Putin accountable for the loss of lives in the country.

YOU MAY ALSO LIKE:   BREAKING: Ex-President Jonathan joins 2023 race, as ‘group’ buys him N100m APC form

The US leader described the attack on Ukraine as unprovoked and unjustified, adding that more sanctions would be imposed on Russia and its business entities.

The US president said he held a phone call with his Ukrainian counterpart, Volodymyr Zelensky after the attack on Ukraine, which is sandwiched between Russia and NATO member Poland.