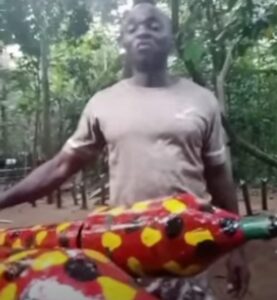 The self-acclaimed leader of the group vowed that it’s men will defend Biafra with the last drop of their blood.

He threatened that troops of the Nigerian Army can not defeat them and they have strategies that they will not reveal.

This is coming after troops of the Nigerian Army deployed under Exercise Golden Dawn in the southeast neutralized a gunman belonging to the Biafran National Guard.

According to the spokesman of the Army, Brig-Gen Onyema Nwachukwu, the gunman was killed when troops resisted an attack, while others escaped with gunshot wounds.

Meanwhile, the BNG fighters in the video unveiled what appears to be rockets named ‘Red Devil 01’.

The rockets were painted black, green, red and yellow, colours which are synonymous with Biafra.

The self-acclaimed leader of BNG identified as Innocent Orji stated that “Biafra is real”.

YOU MAY ALSO LIKE:   BREAKING: Hanifa’s Killer Arraigned In Court [PHOTO]

He said, “We have re-declared the sovereignty of the Biafra nation; we have hoisted our flag. I and my men will defend Biafra with the last drop of our blood no matter what.”

“We will be going out to defend our nation and boundaries, we are not afraid of the soldiers. We must do the needful. The support of the people will help us to save more lives.”

YOU MAY ALSO LIKE:   Buhari urges media to ignore Yoruba Nation, IPOB agitators at UN

“This is not 1967, we have our strategies. We won’t tell the people what we are going to do. Nigerian soldiers can never defeat us”, he said

The Biafra National Guard in a video posted on Facebook on Tuesday night stated that sovereignty of the Biafra Nation has been declared. 2021-11-03
Oluwasegun Adesuyi
Share

Previous Viewpoint: Emefiele And The Not So Exclusive Audio Tapes
Next Why is Obi Cubana with EFCC and not Tinubu or Abba Kyari? Reno Omokri Questions FG