Home / cover / Viewpoint: Emefiele And The Not So Exclusive Audio Tapes

Viewpoint: Emefiele And The Not So Exclusive Audio Tapes 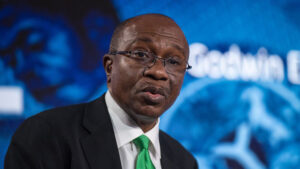 Nigeria, must we always kill our illustrious sons? It is a question that several persons of repute, including activist, had asked in the past and the question again took on relevance in recent days as the hyenas hemmed in what they thought was their prey and tried to snuff life out of his career. The intended dinner of the human hyenas was the Governor of the Central Bank, Mr Godwin Emefiele.

The hunting ground of choice was the web pages of Sahara Reporters, which went to town with the screamer, “CAUGHT ON TAPE: How Central Bank Governor Emefiele, Deputy Adamu And Top Officials Discussed How To Cover-Up N500bn Which They Stole From The CBN”. But it turned out the hyenas were not meant to have Emefiele for dinner, they went hungry. Contrary to the envisaged endgame, President Muhammadu Buhari handed him another five years in office. And who would not, considering the superlative outing he had in his first term? It must be this performance that made his confirmation by the Senate to be as fast as lightning.

Beyond being re-appointed and being expeditiously confirmed to continue leading Nigeria’s apex bank, it turned out that the report carried by Sahara Reporters was the usual hatchet job. The best the report was able to do was to twist a routine telephone conversation out of context to allege a theft that never took place while further exposing the shallowness of the folks behind the news blog and those who contracted them to do the hit job.

The story they put out has been spectacularly rubbished by the statement issued by Mr. Isaac Okoroafor, CBN’s Director of Corporate Communications. There is no need to rehash the explanation offered in that statement but suffice to say the statement exposed the lack of understanding on the part of those who thought they had caught Mr Emefiele in a compromised position worthy of breaking news and embarrassing enough to the government to not reappoint him. The reality, however, is that they only succeeded in convincing the rest of us how ignorant they are about the way reserve banks work.

There is the outside chance that these hyenas are not so ignorant; they know there is no substance in their claim but they were deluded to expect that Nigerians and their leaders are naïve to the point where they will rush to crucify Emefiele without first weighing the substance of the supposed allegations implied by leaking the tape.

Three things stand out in this ugly saga of a failed blackmail attempt. The first is that the recording points to the existence of deeply political operatives in all branches and agencies of government. Those who made the audio went to great length to procure their tainted produce

Whether they bugged or hacked the telephone sets in the CBN Governor’s office, compromise the internal switch at the apex bank, or deployed eavesdropping technology to intercept the calls, this is a red flag that public officials are now persistently under threat from political operatives that are out to garner information for their own end.

To the extent that Mr Emefiele’s telephone conversation was in pursuit of legitimate duty, as we now know, the perpetrators of this act have breached several of the laws of the land and their action can be likened to an attack on the country.

A second observation is that the kind of concern one can surmise from the CBN Governor’s discomfort and expressions in the course of the call showed a man that is passionate about getting his country out of an economic mess that took long in making. That people connected with the making of the mess are the ones now trying to make its resolution appear like a crime in progress is the height of travesty.

YOU MAY ALSO LIKE:   Osinbajo launch smart card factory in Lagos, first in sub-Saharan Africa

Mr Emefiele could have simply act indifferently and cited the approvals from the Ministry of Finance as a basis to be unconcerned. But true to his credential as a man that has done much to reduce and now on the verge of eradicating the famed black hole that swallows national resources at the CBN, the audio depicted him as greatly agitated about recovery of the funds that were released to bail out states that failed to be fiscally prudent to the point of becoming insolvent.

A note must be made of the fact that the irresponsible behaviour on the part of state governors, which led to this situation, was the hallmark of the governments that preceded that of President Buhari. State governors of now, even those that do not belong to the ruling party at the centre, have learned that there is no longer room for kleptocratic frivolity.

Furthermore, it is one thing to criminally breach the security of an institution as pivotal as the CBN, publishing the proceeds of that crime amounts to daring the state. It is like someone stealing clothes from a neighbourhood and then parading the streets dressed in the stolen items. Such arrogance comes from the erroneous impression that the state is incapable of visiting the requisite sanction on the offenders or that the criminal in this instance is above the law.

With these observations come the steps that must be taken to prevent blackmailers and criminals from arrogating legitimacy to themselves should they wrongly surmise that society condones their wrong-doings. It is, therefore, necessary to clearly define what constitutes desirable whistleblowing and what amounts to espionage against the interests of the Nigerian state.

A situation where Chief Executives of government agencies and other government functionaries are illegitimately wiretapped cannot be allowed to continue unabated. Today, it is Emefiele, what happens when these criminally minded people turn to bug the Inspector General of Police and his key staff while making the recordings available to bandits and kidnappers? Or how much of this wiretapping have been deployed for insider trading or machination towards the collapse of the banks regulated by the CBN?

Also, the government must make it a priority to get to the bottom of this breach at the CBN. The breach and other actions carried out in its aftermath should be subjected to review by the office of the Attorney General of the Federation such that those found culpable – individual or corporate – would be made to face the law, of which there are adequate provisions.

This piece will conclude on the note of urging Mr Emefiele not to be daunted by the antics of those that feel pained that the CBN is no longer the ATM pool for corruption because of the reforms he has instituted there. Nigerians, who are his actual employers, are happy with his work, which made them greet his re-appointment with accolades. It’s the views of these employers that matter and not the perverted indulgence of a criminal few.

Viewpoint: Emefiele And The Not So Exclusive Audio Tapes 2021-11-02
Oluwasegun Adesuyi
Share

Tags Viewpoint: Emefiele And The Not So Exclusive Audio Tapes