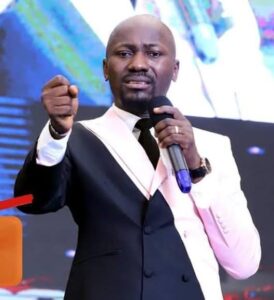 This is coming after the blogger accused Apostle Suleman of having an affair with multiple nollywood actresses and female celebrities.

The blogger also alleged the man of God of being diabolical, claiming he is responsible for the illness of popular actress, Halima Abubakar.

These allegations were punctured as mere fabrications from hell by several celebrities among whom are Shan George, Queen Nwokoye and others who came our to debunk the allegation.

In his reaction, Apostle Johnson Suleman denied the allegations, slam gistlover with insults and dare him to add more names because the list is not yet complete, while making it known that he is a man on a mission that only God can stop him, and that he isn’t concerned with the allegations and keeps running his crusade.

Few days after Apostle Suleman’s declaration, his statement has come true with the identity of Gistlover being uncovered and the clergy man said, he has no reason not to reveal gistlover’s identity as this would save thousands of politicians, clergymen, leaders, actors, actresses and businessmen from future blackmail by gistlover as his only source of living is blackmailing people

It was also confirmed that he will unveil the blogger’s name, pictures and families very soon and make it public.

YOU MAY ALSO LIKE:   2023: Dele Momodu Knocks RCCG Over Creation Of Directorate Of Politics