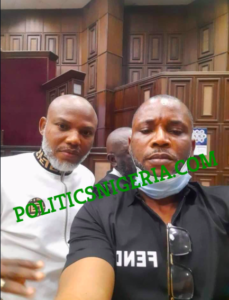 The Federal High Court sitting in Abuja has refused to grant the request for the transfer of leader of Indigenous People of Biafra, Nnamdi Kanu, from the Department of States Services facility to the Nigerian Correctional Centre.

Kanu had pleaded not guilty to a seven-count amended terrorism charges filed against him by the federal government at the Federal High Court sitting in Abuja.

YOU MAY ALSO LIKE:   ‘Our constitution guarantees rights to Nigerians, not cows’ -Malami

After taking his plea, his lawyers led by Ifeanyi Ejiofor told Justice Binta Nyako that he had an application seeking his transfer from the facility of the Department of States Services to the Nigeria Correctional Centre, Kuje.

But the application was denied.

It was earlier reported that Kanu’s lawyer had objected to the seven counts preferred against his client.

Ejiofor had said that his client needed to leave the DSS custody so that they could have unrestricted access to him.

After the court rose, the DSS whisked him away from a side entrance of the court.