Nigerian Elites, Not The Ordinary Man Are Responsible For Crude Oil Theft–NNPC GMD 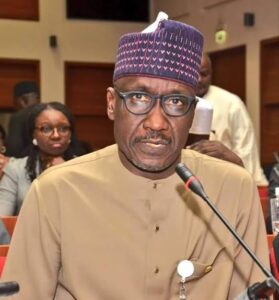 The Group Managing Director of the Nigerian National Petroleum Corporation, Mr Mele Kyari, has said that the elites, and not the poor masses are responsible for the theft of crude oil in Nigeria.

Kyari who said this on Thursday at the All-Nigerian Guild of Editors Conference described the theft of crude oil as a huge drain on the revenue of the government.

He said crude oil theft had made the corporation to enter into strategic collaborations with security agencies so to put a stop to the menace.

The GMD said before the NNPC’s collaboration without security agencies, the country was losing about 20 per cent of crude oil volume to theft.

Kyari who said the level of theft has been reduced to about four per cent, called on the media and other stakeholders to join the fight against the menance.

He said the need to address the issue of crude oil theft had become compelling, as the four per cent currently being lost is even higher than the internationally acceptable standards of 0.5 per cent.

He said, “We are pumping Petroleum products and until the intervention that I’ve just mentioned, we lose up to 20 per cent of the volume from that line without a spill.

“And I’ve said this in very many fora. There are many of the residences, accommodations and communities I see around that pipeline, with all respect they are essentially communities of thieves, because you do not see the spill.

“And today, I can also confirm that because of the interventions that we have commenced with all the relevant security agencies in the last one or so years, we have seen that fall from stealing from 20 per cent down to four per cent. That is significant.

“But when you say four per cent of 10 million liters which pass on a line every day, then this is still very significant. There is so much work that needs to be done so that we can close that gap to the tolerance level of 0.5 per cent. That’s what the industry accepts.

“Today, the losses are so huge that we are now moving forward with an alternative plan to ensure that we can secure these assets.

“I don’t want to call numbers because it can be very misleading in the international market, but I can tell you that we lose sufficient volume to crude oil theft in our country and we’re acting on it. And who steals crude oil? Well, it is not the ordinary man in the village. It’s the elites of society, and it needs all of us to fight them.

“So when we fight them, it is a survivor for all of us, but also for the ordinary people.”

On the rehabilitation of the refineries, the NNPC GMD told participants at the event that work is progressing on the Port Harcourt, Warri and Kaduna Refineries project.

“Now I can confirm to you we have taken responsibility. We will fix these refineries, we have started the process, before the end of this year and you will see work will be delivered and we will deliver these refineries,” he added.

On the issue of energy transitioning, the NNPC Boss said that the implication is that it would lead to a reduction in demand for fossil fuels by 2050 so as attain the zero carbon emission level.

He added, “There’s something else happening in the world. It’s called energy transition. What that means is that there will be less focus on fossil fuels so that we can achieve zero carbon by year 2050.

“The implication of this is that you have to start reducing consumption or change the utilization of fossil fuel everywhere in the world. For us, its a very tall task. The reason is also very simple today as we all know we are energy deficient.

“We know that we are very far away from the jurisdictions that are advocating for energy translation. We can walk away from fossil fuels. The only resource we have that is very close to us and that is cheap is gas and we don’t develop it.We don’t put power on the ground. We don’t create gas based industries.

“We are no where near attainment of the zero carbon situation by 2050. And indeed the implication is deepening poverty and by implication also deepening insecurity which is also the theme this conference is trying to address.

“And therefore, it’s a very considered view that there must be energy justice. Energy justice means that countries will move in the pace that they can with the realities that they face, so that you can transit on the basis of your contribution to the carbons emissions.”

On the operations of the NNPC, Kyari said that things have changed now as the Corporation and it’s subsidiaries for the first time are being were allowed to do things the way it should be done.