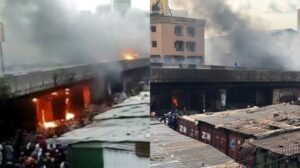 Lots of shops have been destroyed in a fire outbreak at Apongbon Market in Eko Bridge, Lagos State on Wednesday morning.

The fire incident, which is currently raging, has caused a gridlock on the Eko bridge and also crippled commercial activities around the Lagos Island area of the state.

Though the cause of the fire incident could not be ascertained at the time of filing this report, it was learned that goods worth millions of naira were destroyed by the inferno.

According to a source, the incident happened around 7 am, Wednesday, March 23, 2022.

But motorists have been urged to ply alternative routes following the reports of the fire which gutted some vehicles under the Eko Bridge.

“Traffic from Eko bridge has been re-routed to Ebute-Ero to link inner marina. Men of fire service and other security agencies are still on the ground. Therefore, CMS bridge and Eko bridge inward/outward Apongbon is close to traffic at the moment,” Lagos State Traffic Management Agency tweeted.