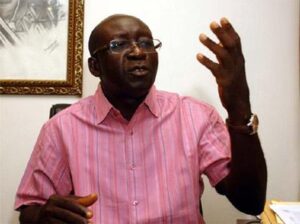 Former Senate President, Dr Iyorchia Ayu, has emerged the consensus candidate of the Peoples Democratic Party, PDP.
This is coming ahead of the main opposition party’s October 31 national elective convention holding at the Eagles square, Abuja.

The former Senate President emerged the consensus candidate after hours of continuous meetings by PDP stakeholders of Northern extraction in Abuja.

Naija News had earlier reported that three candidates emerged from those contesting to become the next National Chairman of the PDP.

A candidate emerged each from the North Central, North West, and North-East geo-political zones.

A former Katsina State Governor, Ibrahim Shema defeated other aspirants to emerge from the North West, Senator Suleiman Nazif from Bauchi State, who is the current PDP Deputy National Chairman (North), emerged as the sole candidate from the North East and the North Central chose former Senate President, Iyorchia Ayu from Benue State.

To emerge, Shema got votes from 6 out of 7 states from his zone, leaving his closest challenger, former Kaduna State Governor, Ahmed Makarfi with votes just from Kaduna his home state.

Nazif on his part had no challenger and emerged the sole candidate from his region.

YOU MAY ALSO LIKE:   18-year-old girl Becomes Commissioner of Information in Rivers

While the North Central zone of the PDP agreed to the choice of Benue-born former Senate President, Iyorchia Ayu as their candidate for the position of national chairman of the party.

Previous Oluwaseun Fabiyi Rejoices with Ace Journalist, Otunba Segun Ogunbunmi On His 50th Birthday.
Next Just In: CAN Commends Senate Over U-Turn On Electronic Voting, Transmission