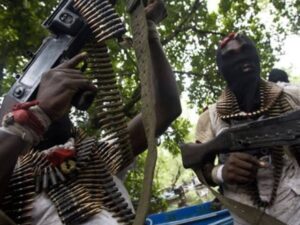 The incident happened in Kachiwe village and spread to other adjourning villages in the area.

Vanguard gathered that the bandits are suspected to be part of those who were smoked out of their hideouts in Kaduna State.

They were said to have arrived in the village on Motorcycles fully armed and started shooting sporadically to scare the villagers during which many people were killed.

From Kachiwe Village, the bandits reportedly took their onslaught into the adjourning communities where many were also killed.

Secretary to the Niger State Government, Alhaji Ahmed Ibrahim Matane, who confirmed the attack in a telephone conversation in Minna did not give the actual number of those who died from the attacks.

He said the State Government is not leaving any stone unturned in its efforts at ridding the state of crime and appealed to Nigerllites to provide security agencies with credible information to succeed.

YOU MAY ALSO LIKE:   Why Osinbajo, Fashola And I Didn’t Visit Tinubu In London – Aregbesola

He also called on the Federal government to come to the rescue of the state.

“What is happening to us in Niger State in terms of insecurity is beyond our power and this is why we are calling on the Federal Government to come to our rescue immediately,” the SSG pleaded.

Similarly, the state Commissioner of Police, Mr Monday Bala Kuryas, also confirmed the attack in a telephone interview in Minna adding that the Police have taken steps towards tracking down the perpetrators of the criminal act.

YOU MAY ALSO LIKE:   Tiwa Savage sextape: ‘I am that crazy that I can put it out myself’, Singer Tells Blackmailer [VIDEO]

“A team of policemen have been dispatched to the area to safeguard lives and properties of people of Sarkin Pawa,” the Commissioner revealed.
He also confirmed that three people were killed during the attack of Kagara, Rafi local government council of the state by gunmen on Monday.

Four people have been confirmed killed and one injured in two communities of Irigwe Chiefdom, Bassa local government area, Plateau State as gunmen opened fire on the victims, Tuesday.

Although security agents did not confirm the incidents as the State Police Public Relations Officer, ASP Gabriel Uba did not pick his calls nor reply to the text sent to him at the time of filling this report but Davidson Malison, the National Publicity Secretary, Irigwe Development Association, IDA confirmed the attacks with gory photographs.

According to him, “Four people have been confirmed killed by herders on Tuesday around 6:50 pm. Three persons on a motorcycle were ambushed along Twin Hill Road, Jebbu Miango, Miango District of Rigwe Chiefdom, two were killed instantly and one sustained gunshot injuries. They were on their way from Jebbu Miango to Miango community when the herders laid an ambush on them. The motorcycle was also burnt to ashes.

Previous Abba Kyari: IPOB/ESN Are Celebrating His Exit With Crime, We want Him Back – Joe Igbokwe Tells Buhari
Next JUST IN: APC releases revised timetable for State Congresses