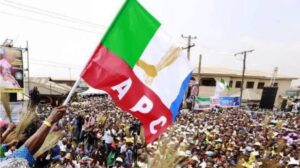 The ruling All Progressives Congress (APC) has released the revised timetable and schedule of activities for its October 16 nationwide State Congresses to elect party officials at that level.

Senator John Akpanudoedehe, the National Secretary of the APC Caretaker and Extraordinary Convention Planning Committee (CECPC), announced this in a statement on Thursday in Abuja.
“Pursuant to the provisions of Article 11:A sub-section (i-xiii), and Article 17(i) of our party’s Constitution.
“The CECPC of our great party has approved the revised timetable and schedule of activities for the conduct of Congresses across States in the federation to elect party officials,” he said.

According to Akpanudoedehe, purchase of forms for the State Congresses which commenced on Wednesday (September 15) would end on Monday (October 11), while screening of aspirants for State executives would be on October 13 and 14.

According to him, the State Congresses would hold on Saturday (October 16), while appeals arising from the exercise would be from October 23 to 30.

YOU MAY ALSO LIKE:   Offa Poly Denies Lecturer's allegation against rector, says he is a dismissed staff
JUST IN: APC releases revised timetable for State Congresses 2021-09-30
Oluwasegun Adesuyi
Share