BREAKING: I Won’t Fold My Arms And Watch Governors Transfer Their Debts To FG – Malami 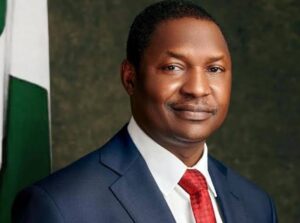 Abubakar Malami, Attorney-General of the Federation and Minister of Justice, has hit back at state governors after they criticized his office over plans to deduct $418 million from their monies to settle a debt owed to consultants by the 36 states and local governments in the country.

The Nigerian Governors Forum (NGF) and the Association of Local Governments of Nigeria (ALGON) were said to have engaged legal services of the consultants in 2013 to help them recover funds that were over-deducted by the federal government from their monthly federal allocations to service loans taken from the Paris Club.

The state governors had few days ago faulted Malami on the planned deductions and stated that his alleged backing of the consultants to get paid, “raises questions of propriety and the spirit of justice”.

The governors had noted that a Federal High Court sitting in Abuja had recently stopped the Federal Government from deducting the said $418 million and alleged that the “undue haste” by Malami to effect the payment “suggests that there is a special relationship between the AGF and the consultants over and above Nigerian citizens.”

But responding in an Arise TV interview monitored by THE WHISTLER on Thursday, Malami noted that the Paris Club Refund issue, particularly the contract entered into between the states and the consultants, predates the current administration.

According to the AGF, the contractors had delivered on their job and were “fundamentally not paid the fees for the services they claimed to have rendered”.

He noted that the NGF and ALGON’s alleged refusal to continue with payment of the legal fees prompted the consultants to institute a suit against the state and local governments for “the determination of their rights and indeed enforcement of their fees” and had made the Federal Government a party to the suit.

Malami said a consent judgment entered into and submitted to a court by the NGF, ALGON and consultants in 2013 resulted in “the liability in contention today”.

YOU MAY ALSO LIKE:   BREAKING: Plateau Speaker Ayuba Impeached

The AGF said after the states failed to pay their legal fees, the consultants approached the Federal Government between 2016 and 2019 to intervene in the matter.

According to him, the governors and ALGON had agreed that the “payment should be deducted from their monies and should be effected to the consultants”.

“But when eventually theses claims were made (by the consultants), the Federal Government under the Office of the Attorney-General of the Federation felt that the amounts the ALGON and NGF had agreed to be paid to these consultants was in fact a very huge amount of money and the Federal Government became suspicious of what the NGF and ALGON were up to, taking into consideration that what was in contention were the services.

“So, the Federal Government wrote to the EFCC and DSS seeking for the verification of the veracity and authenticity of the claims on one hand and the judgement that gave rise to the claim.”

The AGF said the EFCC and DSS wrote back to him, confirming the liability of the state governments in the contract.

“I am happy to report that the governors, as at 2017, individually wrote in confirmation of admission of liability and the same thing ALGON.”

Malami wondered why the state governors did not object to the deductions when they commenced in 2016, saying “Now, nothing untoward happened thereafter until perhaps of recent when the NGF wrote, seeking to avoid liability”

He said, “it is indeed amazing that the governors are now belatedly, after having serviced the same claims over a period of five years, turned around to raise objections in respect of the payment even when they had consented on their own to a judgment which was entered in 2013 before this government came in place.

“Two, they had been effecting periodic payments in respect of the same [and] they had provided individual indemnity commitment that these payments should be effected over time.”

The AGF stated emphatically that he won’t sit idly and watch the NGF and ALGON “turn around to create a situation that would expose the Federal Government to a liability even when it was indeed their liability that by their own showing, admission, and commitment, they have been servicing and they have conceded to.”

The Paris Club is group of public lenders who help debtor countries secure debt relief either by postponement or reduction in debt service obligations, amongst others.