BREAKING! Many Dead As Explosion Rocks Church In Ondo State 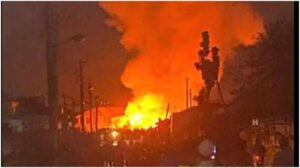 Many people have lost their lives after an explosion on Sunday hit St Francis Catholic Church, Owa-luwa Street, in the Owo Local Government Area of Ondo State.

Reports said the explosion on the church grounds killed several people and injured many more.

An eyewitness, Kehinde Ogunkorode, told Daily Post that the incident caused chaos in the vicinity, with residents fleeing for safety after being caught off guard.
Owo is the hometown of Governor Oluwarotimi Akeredolu

Previous BREAKING! Governor Badaru Withdraws From Presidential Race as Northern Apc Governors zones presidency to south
Next Shettima Apologizes To Osinbajo For Liking Him To A Gala, Ice Cream Seller