Home / cover / Shettima Apologizes To Osinbajo For Liking Him To A Gala, Ice Cream Seller

Shettima Apologizes To Osinbajo For Liking Him To A Gala, Ice Cream Seller 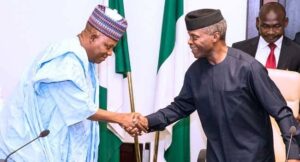 Former Governor of Borno State, Kassim Shettima on Sunday apologised to the Vice President, Yemi Osinbajo for liking him to an ice cream seller for contesting against the national leader of the All Progressives Congress, Bola Tinubu.

Shettima while speaking on his earlier statement said it was not to claim that Osinbajo and Lawan are not worthy of the presidency.

He said his comment was to clarify that they are non-threatening contenders” to Bola Tinubu, under the ruling party.

The former governor had stated that the character can’t earn him the Presidency but should be selling Gala and popcorn.

Shettima title reacting to his earlier comment released a statement titled: “My Channels TV Interview Taken Out of Context” reads partly: “When I appeared on Channels TV last Thursday amidst the tension rippling through our political arena, it was to underline the promise Bola Ahmed Tinubu’s presidential bid held for those yet to establish the certainty of the hurdle ahead of the APC. I never set out to denigrate the personality of any aspirant and not that of my dear friends and allies.

“My assessments of Yemi Osinbajo, and the President of the Senate, Senator Ahmad Lawan, were well-intentioned.

“I never set out to subject them to ridicule but, rather, to stir up interest in the contrasting virtues of the cast of aspirants putting up a fight against my preferred aspirant, one most favoured and advantaged to guarantee APC’s victory in the forthcoming presidential election.

“The interpretations of my remarks on Osinbajo and Senator Lawan are, thus, being done literally and overblown. My words weren’t woven to portray them as unworthy aspirants, but merely to qualify them as non-threatening contenders.

YOU MAY ALSO LIKE:   "I stole plantains to raise N10k for my girlfriend‘s makeup" — Suspect

“I, however, take full responsibility for my utterances and wish to appeal to our teeming supporters to neither take my words out of their metaphoric contexts nor interpret them as a measure and declaration of hostility towards my dear friends and allies.

“I, hereby, tender my unreserved apologies to the Vice President and the President of the Senate for the unintended pains my jibes might have caused them and their families and supporters.”

Previous BREAKING! Many Dead As Explosion Rocks Church In Ondo State
Next Akeredolu Blows hot Over ondo attack, Vows To Hunt Down Assailants