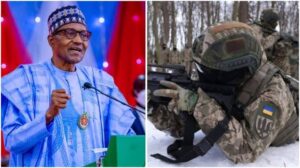 The Muhammadu Buhari-led Federal Government on Friday summoned the Ambassadors of Russia and Ukraine to Nigeria, Alexei Shebarshin and Kirdoda Valerii.

The government summoned the duo over the evacuation of Nigerians from both countries.

This was made known by the Minister of Foreign Affairs, Geoffrey Onyeama, who met with the envoys behind closed doors.

Speaking on his meeting with the Russian Ambassador, Onyeama said he told Shebarshin that the Government of Nigeria could not condone as a country, the violation of the territorial integrity of a United Nations member state.

According to Nigeria’s Minister, he told the Russian envoy that he country must withdraw from Ukraine and prioritise diplomacy and dialogue.

He said: “This is really the position of the government. And also, that we have 5600 Nigerians in Ukraine and we are very concerned about what we are hearing and what we are seeing regarding missiles and bombs about the safety of our Nigerian citizens there, that we would like to be able to evacuate them.

“This would be communicated to his headquarters and that obviously, they consider Nigeria a friendly country and Nigerians; and that they would do nothing to harm Nigerians and assured me that their action is targeted at military installations and that they are not about to start attacking civilian areas and so forth.”

Onyeama added that the Russian envoy insisted that civilians are not being targeted by Vladimir Putin’s military.

On evacuating Nigerians in Ukraine, Onyeama said the issue can only come up when the airports open.

He added that they discussed road travel to facilitate the evacuation, even though some Nigerians have been able to get into neighouring countries such as Holland.

On his meeting with Valerii, the minister stated that the Nigerian government sympathized with Ukraine regarding Russia’s invasion.

YOU MAY ALSO LIKE:   Former UK Chancellor George Osborne to become full-time banker

While pointing out that Nigeria has diplomatic relations with Ukraine, Onyeama said the Buhari government condemned the violation of their sovereignty and territorial integrity.

“And we certainly want the cooperation of the Government of Ukraine to do whatever is possible to ensure their (Nigerians) safety and security and to also seek advice as to how the evacuation can be facilitated,” Onyeama further said.

YOU MAY ALSO LIKE:   FIRSTBANK FELICITATES WITH JUNIOR ACHIEVEMENT NIGERIA ON NOBEL PEACE PRIZE NOMINATION

On his part, the Ukrainian envoy expressed gratitude to the Government and people of Nigeria for their support.

“Right now, we are in a very difficult situation, but we are fighting against the aggression and we believe that we will all win,” the Ukrainian envoy said.

Valerii stated that the evacuation, by air, of Nigerians in the country was currently impossible because it is not safe to fly on the sky of Ukraine.