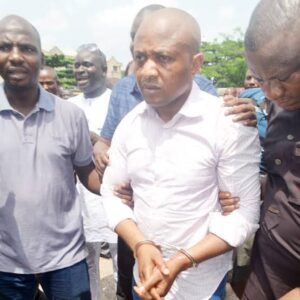 Justice Hakeem Oshodi of the Lagos High Court in Ikeja on Friday sentenced Chukwudimeme Onwuamadike, aka Evans, and his accomplices – Uche Amadi and Okwuchukwu Nwachukwu to life imprisonment.

YOU MAY ALSO LIKE:   Forget Constitution, Arm Yourselves, War Has Been Declared On Us—Akintoye Alerts Yoruba People

In a three-hour judgment, Justice Hakeem Oshodi found the three persons guilty of conspiracy and kidnapping.

According to Justice Oshodi, the prosecution succeeded in proving the charge against the three convicts beyond reasonable doubt.

He, however, discharged and acquitted one Ogechi Uchechukw and two former soldiers, Chilaka Ifeanyi and Victor Aduba, saying the evidence against them was not sufficient enough.