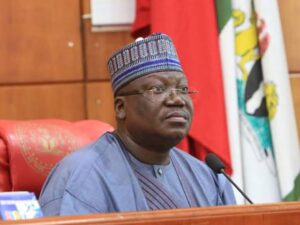 The President of the 9th Senate, Ahmed Lawan, on Monday expressed his intention to battle for the presidential ticket of the All Progressives Congress.

Lawan joined the long list of presidential aspirants under the ruling party ahead of the 2023 general elections.

The Senate President becomes the 24th presidential aspirants to pick the N100m APC expression of interest and nomination forms.

He would be hoping to clinch the presidential ticket of the party ahead of the national leader of the party, Bola Tinubu, Vice President, Yemi Osinbajo and others on the 30th of May.

A group of his friends led by Chief Sam Nkire, a member of the National Caucus of the party and 15 other Senators, purchased the form for him at the International Conference Centre, Abuja.

Naija News had earlier reported that the presidential intention of Lawan has caused a crack in the Senate caucus of the APC over the alleged move to endorse him as the consensus presidential candidate of the parliament.

Some lawmakers had earlier expressed their support for other presidential aspirants in the party ahead of the 2023 race.