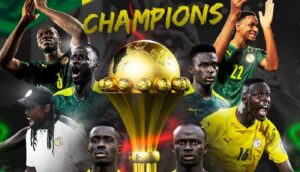 Senegal have lifted their first CAF African Cup of Nations after defeating Egypt in the 2021 nations cup in Cameroon on Sunday.

Egypt, the most successful national team in the continent, lost in the final against Senegal, a side that have not won the AFCON since inception.

Senegal have made 16 appearances in the AFCON without securing the continent’s most prestigious football title.

The Pharaohs of Egypt have won seven AFCON titles.

The Lions of Teranga missed an early chance to clear the coast for their first victory in the tournament’s final.

Mohamed Abdelmonem clumsily brought down Saliou Ciss in the penalty box in the 4th minute, but Sadio Mane fluffed his penalty just minutes into the final.

The 29-year-old Liverpool star went for power with his spot kick but Egypt’s goalkeeper, Gabaski punched the ball to the corner.

Both teams were keen on winning the title with Senegal more determined to lift their first AFCON title.

YOU MAY ALSO LIKE:   2023 Presidency:  No commitment yet from president buhari, Apc leaders hints Jonathan

The match was dragged into the extra time and saw Senegal dominate the possession and shots.

But the match was decided by penalty shootouts.