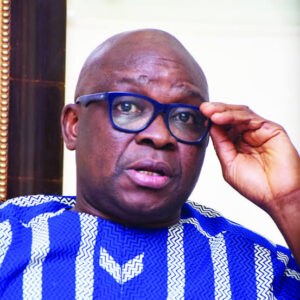 He, however, said he was now engrossed in the governorship election holding in his state ( Ekiti) on June 18 and how his candidate, who is the Peoples Democratic Party flag bearer in the poll, Bisi Kolawole would win the election.

The former governor said he had been calling aggrieved governorship aspirants of the PDP to make them to see reasons to support the party in the coming poll. He added that he called former Governor Segun Oni after the primary election but he did not pick the calls

Speaking in an interview with SUNDAY PUNCH, Fayose said Bisi Kolawole is very popular and would win the coming election.

Asked if he thought the PDP could win the presidential poll in 2023, Fayose stated that things would become worse and Nigerians would be made to suffer more from the APC which had been in the saddles since 2015.

” It is the people that are at the receiving end. The cost of diesel today is about N400 per litre; during President Goodluck Jonathan’s (PDP) time, it was N140, N145. Whatever we are saying, it is either Nigerians want to remain in perpetual poverty or they save themselves. It is about Nigerians themselves.”

He also boasted that he would defeat Asiwaju Bola Tinubu if the later was picked by the All Progressives Congress to contest the presidential election in 2023 but said he was not sure if he would contest the poll.

YOU MAY ALSO LIKE:   Ex Nigerian footballer, Ibezito Ogbonna, hospitalized after his home in Israel was hit by a rocket from Gaza

Fayose said, “PDP government is far better than APC government in Nigeria. Would he ( Tinubu) leave the APC people and come to give me appointments or will he make me vice president, such that I work for the APC? It is not possible. Tinubu is for APC, I am for PDP. All these insinuations are just to call the dog a bad name to hang it.

YOU MAY ALSO LIKE:   Anambra Election: Intrigue As IGP Baba Redeploys DIG Egbunike

Fayose also debunked the insinuations that he would trade away the candidate of the PDP in the June 18 governorship poll asking the people to discountenance such claims.

“You know we are politicians; we like to say things to destroy one another. I have served this state twice, if anybody should concede to anybody, it should be Fayemi conceding to me. It would not be a healthy election! What does Fayemi want to offer me? Even when I was supposed to be cowed as a sitting governor in the face of the federal might, I was never cowed; I faced the whole of them.

” Against the present APC government in Nigeria, I was and I am a major voice; nobody can take that away from me. What is in Ekiti that I will want to compromise? Is it the resources or what? What will Fayemi buy my conscience with or what will I buy Fayemi’s conscience with? If you are saying somebody is popular, there is no denying that they all know that I am on the ground.

YOU MAY ALSO LIKE:   Tukur Buratai’s Vision and Leadership As Nigerian Army Chief of Staff

” So, I went to the Government House, met Jigawa State Governor Abubakar Badaru, who came to conduct the APC governorship election. The four of us took pictures and I was the one who posted that picture – clear conscience fears no foes. If I had hidden agenda, why did I have to post the picture? I posted the picture and I stated before the fifth columnists start their wagging, I am in the Government House of Ekiti to see off Governor Udom and I saw Governor of Jigawa there and Fayemi and we took these pictures. That shows that I know them. They ( those insinuating compromise) are cheap blackmailers,” he added.