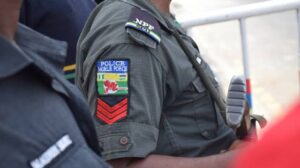 The incident happened inside the police college quarters of Borno Police headquarters in Maiduguri, according to sources.

A senior police officer told our correspondent that the errant officer is currently being detained at the State Criminal Investigation Department (SCID).

A family source said the police sergeant had a misunderstanding with his wife and neighbours tried to intervene but he didn’t listen.

“He and his wife have been having issues for some time now; we tried to settle it amicably, but he refused.”

“The wife told her parents that the sergeant assaulted her; she moved her things out of his house. The wife left due to severe maltreatment by her husband.

“He started shooting and threatened to kill everyone. Unfortunately, he shot people, but six mobile policemen died and two others are currently receiving treatment at Specialist Hospital.

YOU MAY ALSO LIKE:   Herald of Hope...Governor Abdulrazaq’s Great Transformation of Kwara

“He razed down two blocks of eight rooms in the process and also shot his father-in-law.”

The effort to get reactions from police proved abortive as the line of the Police Public Relations Officer in Borno, was switched off at the time of filing this report.