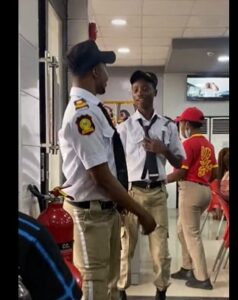 Society gazette reports the Chicken Republic has denied sacking two of its security guards that were caught on camera dancing on duty.

The news of the sack broke on Twitter on Thursday and has since caused heavy backlash from Nigerians. Meanwhile, some defended the action of the restaurant.

In a statement on Friday, the restaurant, however, denied taking such actions noting that the sack came from the security agency it outsourced the stores to.

“As a company it encourages all staff to have fun at work so would never go to the extent of sacking its staff for expressing themselves. This is evident in the multiple songs, dances and nice, nice , chants that you will often hear in our stores.

YOU MAY ALSO LIKE:   NNPC Boss, Kyari Names Four Firms As Culprits Of Adulterated Fuel

“It is disappointing that some people may have the impression that chicken republic fired these security guards for dancing in our stores, this is not true and hence we need to set the record straight.”

“When the management of the private security company saw the two security guards dancing in the video. they had concerns that the security officers, whilst dancing, were not necessarily conducting their duties responsibly and as such were probably not fully focused on their core responsibility which is your safety and your security.”

YOU MAY ALSO LIKE:   FIRSTBANK’S SPONSORED MOVIE, ‘AYINLA’, PREMIERES THIS SUNDAY IN LAGOS

The management of the restaurant however said it has followed up with the security company and will ensure everyone is treated fairly.

“They have assured us that the security guards have not been fired, have been paid their dues and have been offered some training.”

“We value your opinions and have heard you. we can assure you that we are in close communication with the security company and will ensure that everyone is treated fairly and with respect,” it assured

Previous BREAKING: Sergeant Guns Down Six Colleagues At Police Headquarters In Maiduguri
Next DJ Slam to be honoured at Unique Celebrity Nite