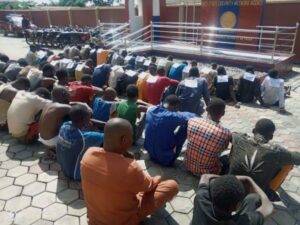 According to a local radio station in Akure, Crest Fm, Amotekun operatives also recovered some weapons and vehicles used to perpetrate the terror attack on the church on June 5.

Recall that gunmen stormed the Catholic church located on Owa-Iuwa Street and killed over 40 persons and injured 70 others injured during a Sunday mass.

The terrorists also used some explosives during the attack before they opened fire on the worshippers. The perpetrators then fled the scene immediately after they carried out the attack.

Days after the sad incident, the Federal Government linked the Islamic State in West Africa Province (ISWAP) to the terror attack in the ancient town.

The Minister of Interior, Rauf Aregbesola, revealed this while addressing State House correspondents after a meeting of the National Security Council presided over by President Muhammadu Buhari.

According to the former Governor of Osun State, the federal government has located the terrorists responsible for the killing of worshippers in Owo.

In a swift reaction, Governor Rotimi Akeredolu of Ondo State refuted the claim that ISWAP was being the terror attack, saying that there is no evidence that points to the terror group.

YOU MAY ALSO LIKE:   BELLO INSTALLED AS THE 41ST ROTARY DISTRICT 9110 GOVERNOR, CALLS FOR SERVICE TO CHANGE LIVES.

Also, the Chairman of the Nigerian Governors’ Forum and Governor of Ekiti State, Kayode Fayemi, disagreed with the federal government’s assertion.