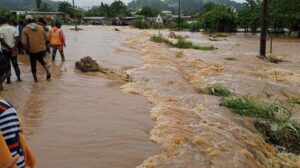 A student of Mount Carmel Girls’ Secondary School in Ikare-Akoko, Ondo State, Motunrayo John, has been swept away by flood at a location close to a river called Dada.

The incident happened after the victim, who is in Junior Secondary School 3, had left the school premises after closing hours. She was said to have dipped her legs into the heavy flood in an attempt to know the depth.

YOU MAY ALSO LIKE:   BREAKING: Another Chibok Schoolgirl Rescued – Zulum

According to an eyewitness account, the victim had lost balance and was already carried away by the flood into the river before help could reach her.

The spokesperson of Ondo State Police Command, SP Funmilayo Odunlami, confirmed the incident in a telephone conversation with Channels Television.

Odunlami described the incident as very unfortunate, noting that parents and guardians should always caution their children and wards from taking such dangerous acts.

She, however, disclosed that a search and rescue operation for the student has commenced, expressing hope that she would be found.