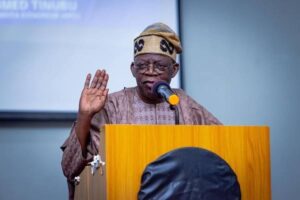 Abdulmumin Jibrin, Director-General of the Bola Tinubu Support Groups Management Council, has dumped the ruling All Progressives Congress (APC) ahead of the 2023 presidential election.

Jibrin’s exit from the APC came exactly one month after he warned that the party may invite doom upon itself if it does not give its 2023 presidential ticket to an aspirant with mass appeal.

YOU MAY ALSO LIKE:   Nengi's reaction when Gov Diri Replace her with 1st Class Law Graduate as Face of Bayelsa

“I have done my best for APC. Its time to move on. I will announce my new political party within the next 24 hours Insha Allah. I will make a formal statement in due course,” he announced in a tweet on Saturday.

THE WHISTLER reports that the move may be an early indication that the APC national leader, Asiwaju Bola Ahmed Tinubu, may also dump the ruling party in the event that he does not emerge as its presidential candidate in the forthcoming primary election.

This website earlier reported that Jibrin warned that how the ruling APC comports itself during its forthcoming primary election will determine whether the party will stand or crumble ahead of the general elections.

“I have said it repeatedly how the APC manages its upcoming primaries at every level (states and national) including Presidential will determine [the] survival of the party.

“Anything short of allowing the choice of the people to prevail in the primaries will spell DOOM for the party!” Jibrin had warned in April.