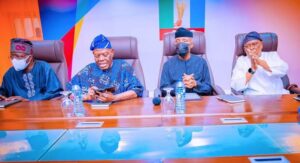 Fresh Information made available to POLITICS NIGERIA on the events that occurred in a meeting between South-West Leaders of the ruling All progressives Congress, APC, on Friday in Lagos has revealed that there is strong animosity between Rauf Aregbesola and Iyiola Omisore.

Reliable sources privy to the details of the meeting revealed that Aregbesola refused to shake hands with Omisore who is now the party’s National Secretary.

YOU MAY ALSO LIKE:   Brazilian footballer arrested, Charged with Attempted Murder for nearly killing referee

It can be recalled that Aregbesola, during the build up to the party primaries in Osun, attacked the national leader of the party, Bola Ahmed Tinubu, a development that did not go down well with the party.

This ultimately led to Omisore’s emergence as Tinubu’s new ally in Osun. Although he greeted Bola Tinubu and was embraced by both Akande and Osoba at the meeting, Aregbesola vehemently refused to neither greet or sit beside Omisore.

This can also be seen in the video below. A source disclosed; “Aregbesola was expected to sit down next to Omisore and Oyetola, but he refused to associate with them, deciding instead to sit far off.”

“Attempts by the elders to make Aregbesola change his mind proved abortive as he said he didn’t want to be associated with Omisore”.

YOU MAY ALSO LIKE:   Arsenal Defeats Tottenham 3-1 To Complete A Miserable September For It's London Rival
2023: Aregbesola refuses to Shake Hands with Omisore at S’west leaders Meeting 2022-05-07
Oluwasegun Adesuyi
Share