Home / cover / JUST IN: Abramovich Out As Chelsea Confirm Sale Of Club To American Billionaire

JUST IN: Abramovich Out As Chelsea Confirm Sale Of Club To American Billionaire 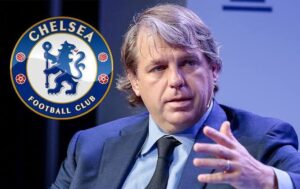 Todd Boehly’s consortium has signed an agreement to purchase Chelsea from Roman Abramovich, the English club have confirmed.

The deal was announced by Chelsea on Saturday after Abramovic put the club for sale in March.

The deal is expected to be completed in late May subject to all necessary regulatory approvals, according to the club.

Chelsea were given May 31, 2022 as deadline to find a new owner for the club, after it sanction the Russian owner.

Abramovich hired the the Raine Group to oversee the sale of the club.

Raine Group have chosen a preferred bidder, headed by the LA Dodgers part-owner – which includes backing from Clearlake Capital, a US investment company .

“Chelsea Football Club can confirm that terms have been agreed for a new ownership group, led by Todd Boehly, Clearlake Capital, Mark Walter and Hansjoerg Wyss, to acquire the Club,” the club said in a statement seen by THE WHISTLER.

The group defeated the £4.25bn bidder Jim Ratcliffe and other consortiums led by Stephen Pagliuca and Martin Broughton to become the new owners.

Chelsea said, “Of the total investment being made, £2.5bn will be applied to purchase the shares in the Club and such proceeds will be deposited into a frozen UK bank account with the intention to donate 100 per cent to charitable causes as confirmed by Roman Abramovich.

“In addition, the proposed new owners will commit £1.75bn in further investment for the benefit of the Club. This includes investments in Stamford Bridge, the Academy, the Women’s Team and Kingsmeadow and continued funding for the Chelsea Foundation.”

YOU MAY ALSO LIKE:   Bello-Koko: A Vision That Turned Around NPA By Olatunbosun Olupitan
JUST IN: Abramovich Out As Chelsea Confirm Sale Of Club To American Billionaire 2022-05-07
Oluwasegun Adesuyi
Share

Tags JUST IN: Abramovich Out As Chelsea Confirm Sale Of Club To American Billionaire