CAN Submits Request For Creation of Spiritual Courts in Nigeria 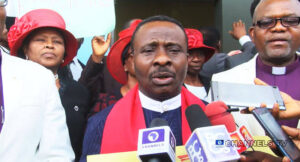 The Christian Association of Nigeria (CAN), yesterday, threw it’s weight behind calls for rotational presidency across all six geo-political zones of the country.

CAN also said it has presented a request for the establishment of ecclesiastical or spiritual courts to adjudicate on matters that relate to Christians. These views were made known at separate events by CAN President, Dr. Supo Ayokunle and General Secretary, Joseph Daramola in Ibadan and Abuja, respectively.

Ayokunle said Nigeria copied from the presidential system of government in the United States and that it should be practiced the way it was copied, adding that Nigeria needed a new constitution that would not promote one religion against others.

“It is in our proposal that Nigeria should be for all. The position of the president must be rotated through the six geopolitical zones of the country. One zone cannot say that because they are in the majority, they should retain the position forever because, others will feel cheated and dissatisfaction will come in. No tribe or ethnic group must because of larger population continue to have the presidency. The time for that has gone. It should be rotated so that everybody can share in the dividends of democracy.”

Speaking further on the constitution review, the CAN president, said: “We have already prepared our documents, and we have sent them to the National Assembly. Our position is that the 1999 Constitution is long overdue for change because we are in the 21th Century, and the present constitution was done in the 20th Century. Change is constant for us to have better society. New things are coming up and technology is also developing, so our constitution needs to be amended.”

CAN’s General Secretary, Joseph Daramola, told journalists in Abuja that the request for the establishment of ecclesiastical courts was part of presentation made at ongoing public hearing on constitution review and it’s expected that the lawmakers would consider and act on the request.

“There’s no place in the constitution that Christianity or church is mentioned. We are not happy about that. We are saying that the recognition and roles of Shari’ah in the constitution be expunged or ecclesiastical courts be included and recognised by the same constitution to adjudicate on the matters that relate to Christians. Shari’ah Court has different stages up to Shari’ah Court of Appeal. That is not the case for Christians or Christianity. We have registered our position and we expect action on the items presented as soon as possible.”

YOU MAY ALSO LIKE:   SHOCKING: See What IPOB members did to residents who disobeyed ‘Sit-at-home’ order
CAN Submits Request For Creation of Spiritual Courts in Nigeria 2021-06-04
Oluwasegun Adesuyi
Share

Tags CAN Submits Request For Creation of Spiritual Courts in Nigeria

Previous PDP governors defecting to APC are afraid of EFCC, says Ortom
Next 18 Dead As Covid-19 Cases Shoots up Again in Nigeria