18 Dead As Covid-19 Cases Shoots up Again in Nigeria 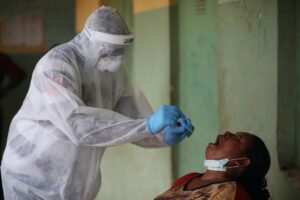 The Nigeria Center for Disease Control (NCDC) announced this Thursday night in its daily update.

The new cases came from eight states and the FCT.

The states of Delta, Rivers, Oyo and Ekiti reported one case each.

“There are backlogs of data due to ongoing data harmonisation from Lagos, Delta and Benue States.’’

The agency said Nigeria’s Test Positivity Rate for COVID-19 is currently one per cent , meaning that one out of 100 tests returns positive.

YOU MAY ALSO LIKE:   FIRSTBANK STAYS AHEAD OF COVID-19, KEEPS FAITH WITH CUSTOMERS

The agency urged Nigerians not to let down their guards, warning that COVID-19 is still very real, and a third wave is still a possibility.

The NCDC said the country had now conducted a total of 2,133,061 tests since the first case relating to the disease was announced in 2020.