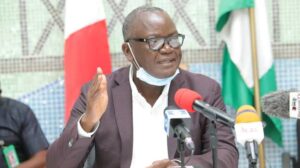 GOVERNOR Samuel Ortom says his colleagues who were in the Peoples Democratic Party (PDP) governors and defected to to the All Progressives Congress (APC) did so because of fear of the Economic and Financial Crimes Commission (EFCC).

The governor, who stated this today in Makurdi shortly after returning from Oyo State where he commissioned some projects on the invitation of his Oyo State counterpart, Seyi Makinde, said defection to APC would not save those who soil their hands from prosecution.

Although Governor Ortom did not mention any name, he was simply referring to the Ebonyi State Governor, Dave Umahi, and his Cross River State counterpart, Ben Ayade, who dumped the PDP for the ruling party.

While Umahi joined the APC last year, the Cross River governor switched to the ruling party a few weeks ago.

Ortom said the PDP governors have been delivering dividends of democracy to their people.

He said: “I have been in this game since 1982, which is close to 40 years now. So you always see all this drama. Some people are afraid of EFCC that is why they are decamping to APC. Recall that a former Chairman of the APC once said that if you decamp to APC your sins are forgiven.

“But we must all realize that there is no hiding place for any criminal or thief. That is the truth. All the eye service you see happening around, when the day of reckoning comes nobody will stop the authorities from fishing out whoever has committed a crime in this country.

YOU MAY ALSO LIKE:   Obaseki’s Exasperating Desperation by John Amenaghawon

“That is why I have always said that prevention is better than cure. I have resolved that I will better go back to my village as a farmer than get myself involved in anything that would be questionable.

“That is also why I try as much as possible to be decent in the handling of the finances and other things of government. So we are not disturbed. You will see what will happen when we get to 2022. I may not be a prophet, but I might be near it. So there is no cause for alarm.

YOU MAY ALSO LIKE:   I Didn’t Write Jowo For Davido – Victor AD denies Song Theft Claim

“This is democracy, people are free to associate with anyone they want. But I can tell you that PDP is waxing stronger. One thing we are doing by constantly holding PDP Governors’ Forum meeting is to reposition the party too. So that it will represent true democracy.”