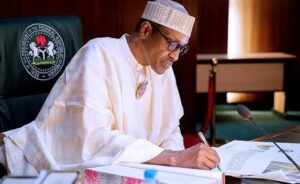 President Muhammadu Buhari has received the 2022 Appropriation Bill from the National Assembly for consideration less than one week that the two chambers passed the bill for presidential assent.

Both Houses had delayed going on recess for the Christmas break to hasten consideration and passage.

While the House of Representatives passed its version of the budget on Tuesday last week before going on recess, the Red Chamber did extend its sitting to Wednesday before finally giving nod and proceeding on recess.

The chambers however raised the estimates as sent in by the president from N16.391 trillion to N17.126 trillion, also raising the oil benchmark from $57 per barrel to $62.

In an official communication signed by the Clerk to the National Assembly, Mr Ojo Amos, to the President, notifying him of the development with Reference Number NASS/CNA/37/Vol.1/35, and titled ‘APPROPRIATION BILL, 2022,’ Amos wrote: “In consonance with the Provisions of the Acts Authentication Act Cap. A2, Laws of the Federation of Nigeria, 2004, I wish, with due respect, to forward to Your Excellency, the authenticated copies of Appropriation Bill, 2022, for your consideration and assent.”

The letter further read: “After Your Excellency’s assent, one copy of the signed bill should be retained in your office while the other two are to be returned for our further action, please.”

The budget will follow a return to the usual budget cycle suspended some years ago by the current administration following confusion in implementation, blames 9n recessions and factors the administration cited as unavoidable.

YOU MAY ALSO LIKE:   Oyo CP Issues Strong Warnings To Okada Riders, Tricylists Against Acts Of Arson In The State
Buhari Receives 2022 Appropriation Bill From National Assembly 2021-12-28
Oluwasegun Adesuyi
Share