Home / Security / Buratai As 2020 African Steward Man Of The Year

Buratai As 2020 African Steward Man Of The Year 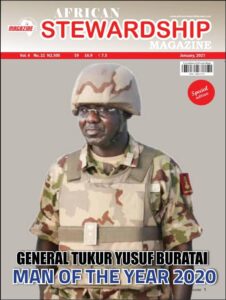 A major plank of the collective resolution by stakeholders and industry players at the December 11 National Association of Online Security Reporters, NAOSRE, Security Discourse Dinner at Oriental Hotel, Lagos was the urgent need for more citizens’ supports for military operatives.
Tagged 2021 Nigerian Security Issues, Funding and Prospects,” discussants were of the view that apart from increase funding for military operatives, citizens’ understanding of the patriotic efforts of the military would create a balanced movement towards a safer Nigeria.

Major Olaniyi, Acting Deputy Director, 81 Division Army Public Relations, stated: “We accept criticism because we are a professional institution. However, what we don’t want is casting aspersion on us, because it has the tendency to weaken the resolve of those still fighting and dishonour the memories of our fallen heroes; it also has the tendency to undermine national unity.”

Olaniyi, responding to concerns raised about members of Police and Army impunity when dealing with civilians affirmed: “Irrespective of whatever uniform we wear, we still share the same humanity with members of society. And we shall try to remain humane with you.”

Tony Akposheri, veteran Nollywood actor, who represented Prince Honourable Ned Nwoko, Grand Patron, NAOSRE, pointed out that the public has roles to play in the security of our society.

“We cannot leave everything to government,” he noted and further submitted: “Nigerian security discourse is timely at this time of our nation, not the issue of sacking service chiefs; if they are sacked and the right things are not in place the situation will not improve.”

Dr Akposheri noted further that: “Our security personnel are not adequately well taken care of and the number of security operatives in this country is not adequate,” he said, pointing out other deficits including working with obsolete tools and technology.

A reflection of these submissions at the NASORE Dinner calls for increase encouragement for military personnel as demonstrated by Africa Steward honour on Lieutenant Tukur Buratai, given their affront against insurgent in 2020 and previous years.

YOU MAY ALSO LIKE:   SETTING THE RECORD STRAIGHT BY CAPTAIN IDAHOSA WELLS OKUNBO (CAPT. HOSA)

Indeed, the Year 2020 grudgingly dragged to an end. It was a difficult and tough year for all Africans. From economic meltdown to wars, conflicts and the blight of the global Covid-19 pandemic. In the continent, Nigeria also had her fair share of these troubles. These predicaments were varied and complex.

As already known, the position of Nigeria in the continent is very strategic and sensitive. It is a country with a large landmass and huge population. And it is not disputable that the African continent is troubled and threatened anytime a misfortune adversely affects Nigeria.

What troubled Nigeria deeply and almost brought the country to her knees last year was the nagging spate of resurgent insecurities. Nigeria was confronted with the menace of resurgent Boko Haram insurgency and the Islamic State West Africa Province (ISWAP) terrorists. The armed gangs regrouped and came back like a bad penny in what appeared in every countenance like a revenge mission over their defeat by soldiers.

Certainly, the peace, security and stability of the country was extremely tested by these organized armed criminal gangs. They registered presence in most parts of the nation and in overwhelming numbers, perpetually overpowering civil security. And in all instances of internal security breaches, the magnitude consistently attracted the deployment of soldiers on special assignments on Internal Security (IS).

These forces of darkness pushed Nigeria to the cusp of total destabilization and disintegration. There were glaring signs of the absolute compromise of national security, like the #EndSARS protests, had Government failed to take proactive steps to extinguish the smokes of these insecurities and disable the brigands. But at the end of the year, Nigerians gracefully crossed into 2021 with less of such troubles or precisely, their absolute obliteration based on the interventions of the Army.

Nigeria’s Chief of Army Staff (COAS) and leader of the counter-insurgency operations, Lt. Gen. Tukur Buratai dispensed himself in these troubled times as Nigeria’s loyal and trustworthy Salvationist. He deserves the most endearing and profound eulogies for imposing security sanity in Nigeria today.

The Army Chief led soldiers to accomplish these difficult security tasks professionally, and distinctively. Gen. Buratai doggedly ensured the berth of peace and security in Nigerian and by implication, the African continent. He rescued Nigeria from the hands of armed captors, sanitized the country and opened fresh vistas of security regeneration or rebirth.

As Punchman of the counter-insurgency operations in the country, Gen. Buratai discharged his stewardship to fatherland with dexterity, distinction and splendor. He salvaged Nigeria and restored lost hopes. His works erased the feeling of hopelessness harboured by most Nigerians over insecurity. And surely, with him still on the saddle, Nigerians have settled with the reality that it is possible to live in the previously tormented country, free of security threats or molestations from armed gangs.

Nigeria was on the verge of complete anarchy, and the total breakdown of law and order. But Gen. Buratai staged out and effectively quenched the destructive fires triggered by the pig -heads of the #EndSARS campaigners. The Army marketed itself as Nigeria’s redeemers.

In the wake of resurgent insecurities in April 2020, Boko Haram insurgents’ and ISWAP terrorists bounced back with venom. Gen. Buratai relocated to the Northeast region. He spent two months in the trenches, directing and personally leading troops of the “Operation Lafiya Dole” in the battle against terrorists in the frontlines. And the positive results within a week were incredible. He was able to neutralize over 2,000 terrorists, destroyed their re-established camps and confiscated numerous weapons from insurgents.

Armed bandits and allied criminals terrorizing the Northwest region groaned and numerously met their waterloo, when Gen. Buratai launched “Operation Sahel Sanity.” Within weeks, troops dislodged them from their hideouts in the various forests; neutralized hundreds of the bandits in fierce battle encounters with troops. The Army impounded the weapons abandoned by fleeing bandits. Scores of the criminals, logistics suppliers and connivers were also arrested in the course of these operations. Gen. Buratai saved Nigeria from this nightmare.

The kidnap of the Kankara schoolboys and later, the Mahuta school children by bandits, sparked national uproar and outrage. Tongues sharpened even in the international community to discredit President Muhammadu Buhari, if the abductees do not regain their freedom. But Gen. Buratai saved the day. He immediately marshalled out troops which moved fiercely after the abductors.

And in a skillfully executed unarmed operation, soldiers rescued all the kidnapped school children within six days. Also, none of them was either injured or wounded in the course of the operations. They were reunited with their families in a presidential ceremony. State Governors whose states were tormented by armed bandits and cattle rustlers have attested to the restoration of peace and security by soldiers.

Similarly, the ethnic warlords and militias tormenting communities of the North central region were also repressed by Gen. Buratai. Hordes of the gang leaders and the foot soldiers of these criminal sects were apprehended; while many of them kissed death in battle encounters with troops.

Southern Kaduna has known peace from ethno-religious conflagrations now because Gen. Buratai refused to shirk. He doused the restiveness, imposed peace and security in the warring areas. At this instance too, Gen. Buratai discharged his stewardship to Nigeria with enviable patriotism and dedication.

Furthermore, violent campaigners for secession also attempted several times to disrupt the public peace by breaching security. They were essentially an assembled band of criminals, who operated as armed robbers, kidnappers, and indulged into other repulsive acts of criminalities. The COAS again sauntered unto the stage and never allowed the armed criminals perpetrate any form of evil against Nigeria. He rescued an entrapped people of the Southeast.

Therefore, Gen. Buratai deserves the medal of African Steward Man of the Year 2020. He has proved faithful military service to his country. He has always intervened in the darkest hours in the history of Nigeria with the candle of illumination.

Nigerians who never believed that it is possible to exist in Nigeria and insulated from lethal insecurities are loudly testifying to Gen. Buratai’s exceptional prowess and unique military competence in tackling Internal Insecurity (IS) threats. Whether these security threats manifested the character of resurgence or freshly created, the Army boss descended on the criminals. The ombudsman of the counter-insurgency operations is incontestably the winner of the African Steward Man of the Year 2020. Congratulations, sir and may you soar higher in bringing peace and security to Nigeria and Africa