Home / Society & Lifestyle / Religion / Confession! What Ghana most powerful Herbalist said about Adeboye, Oyedepo and others’ source of power

Confession! What Ghana most powerful Herbalist said about Adeboye, Oyedepo and others’ source of power 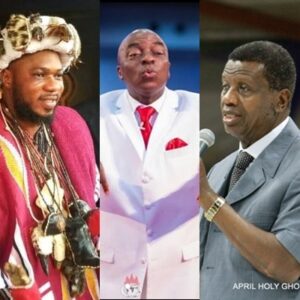 A popular Ghanaian witch doctor who is revered as the most powerful Witch Doctor in Ghana has drop a bombshell that has got people talking.

The witch doctor during an interview with their local television station mentioned the names of the four Nigerian top pastor who according to him he is afraid of them both in the physical and spiritual realm and also mention other three that come to him for spiritual powers to do miracles and make more money.

Bishop David oyedepo of the living faith Church, according to chief naatia is a gifted man of God that is sent by God and has been tested both physical and spiritual, I’ m very very afraid of him because he is the most powerful and fearless man of God Nigeria has.

Another man of God was pastor Paul eneche of the Dunamis Church, according to him he recognized pastor Paul as a young but very powerful man of God which no forces of the enemy can temper with him he possesses very strong power of God that cannot be compared to any.

Chief Naatia also in his statement made mention of apostle Sulaiman saying he is also a very respected man of God that cannot be tampered with in the spirit realm, he went further to say that they have tried to bring him down in all means but could not.

And finally he made mention of pastor Adeboye saying that this particular man of God is a grandfather of Nigeria that he solicits for Nigeria a lot in the spirit realm, he said he respects pastor Adeboye so very much.

The witch doctor also said that there are many of the Nigerian pastors he has helped with charms to succeed in their various ministries saying, some of them have been caught and exposed because they didn’t follow the instructions of the spirit he gave to them.

@societygazette
Previous Buratai As 2020 African Steward Man Of The Year
Next Unveiling! Dog and Cats that are Richer than Davido and Wizkid and others