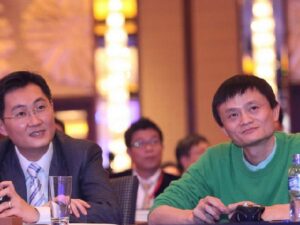 49-year-old Ma Huateng is currently the richest man in the most populous country in the world. Ma Huateng who is also called “Pony Ma” by fans, is the Chairman and Founder of Tencent Holdings, China’s biggest Internet enterprise.

Ma Huateng is currently worth $64.6bn surpassing Zhong Shanshan who is currently at $62.5bn according to the Bloomberg Billionaire’s index

Ma Huateng is also the youngest amongst the first 15 multi-billionaires in the world.

At 49 years old, he is the Chairman of Tencent, a company listed amongst the biggest companies in the world by the sheer size of its market capitalization.

Ma Huateng founded Tencent 5 years after graduating from the University of Shenzhen where he studied Computer science. He teamed up with 4 of his colleagues in school to found the business. Tencent is the internet company behind the social media giant WeChat with over 1 billion users.

YOU MAY ALSO LIKE:   Segun Agbaje Led GTBank where Cars are said to hold more Value than Human

The company enjoyed early success with QQ. In the coming years, it raised over $32 million in investment and went public in 2004.

In 2011, it launched its most successful product to date – the giant social media platform, wechat.com with over a billion users. In the massive Chinese online market where Facebook and WhatsApp are banned, WeChat enjoys a large share of the market. It also offers its users additional features like shopping, gaming etc.

YOU MAY ALSO LIKE:   Bill Gates is paying off Nigeria's $76 million Polio debt

Ma Huateng of Tencent is obviously a fan of diversified investment. The company has spread its tentacles to various areas and markets, mostly in the United States.

According To CNBC, Tencent has invested in the following companies:

Ma Huateng is referred to as Pony Ma by his large and youthful fan base. He is not related to Alibaba founder Jack Ma; both billionaires, however, share mutual respect.

Ma Huateng is currently worth $63.4bn and is the biggest success story from the streets of Shenzhen which is often referred to as China’s Silicon Valley.

He is the latest richest man in China.

Ma Huateng and his colleagues did one simple thing. They founded a social media platform for their home country.

Ma Huateng is a strong beneficiary of the long-standing ‘China First’ policy of the Chinese Communist Party.

In a world where other countries are relying on US tech companies like Facebook and Apple for their tech products, the Chinese have always insisted on building their own and Ma Huateng is a product of such ideology.

Previous Omu Resort get First Live Zebra in Lagos
Next Opinion: IBADAN, Honour to the undeserving By Wole Arisekola