Home / cover / Gbajabiamila: ‘Obasanjo Hugged Tinubu Like Brother, Gave Him A Pat, Prayed For Him’

Gbajabiamila: ‘Obasanjo Hugged Tinubu Like Brother, Gave Him A Pat, Prayed For Him’ 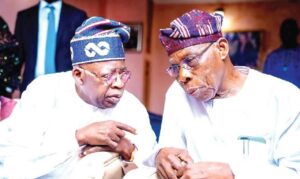 Femi Gajabiamila, Speaker of the House of Representatives, has narrated what happened behind the scenes when Asiwaju Bola Tinubu met with former President Olusegun Obasanjo at his Ogun residence on Wednesday.

Tinubu, who is perceived as a political enemy of Obasanjo, visited the former president as part of consultations for his 2023 presidential bid.

The visit came as a surprise to political watchers as the All Processive Congress (APC) presidential candidate had severely criticized the two-time former president in the past.

Tinubu, in an open letter in 2019, described Obasanjo as an “election rigger without peer” adding that the ex-president “is the person most responsible for the flaws in the Nigerian political economy since 1999” and whose “ego is as expansive as the firmament but his good deeds would fit into a modest sachet with ample room to spare.”

But re-counting Tinubu’s visit to Ogun on Thursday, Gbajabiamila said Obasanjo received the former Lagos governor “like a brother” and gave assuring statements about his aspiration to be president.

The Speaker stated this during a meeting of APC stakeholders at the Surulere Local Government Area (LGA) in Surulere, Lagos.

“When we were going to Obasanjo’s house, we were eight, including Asiwaju Tinubu and me; we didn’t want many people to know about the meeting. So, we were to meet Obasanjo and five others from his side,” Gbajabiamila was quoted by The Nation to have said.

“But when we eventually got there, we met something pleasantly shocking: a mammoth crowd of our supporters was already at the former president’s house waiting for us.

YOU MAY ALSO LIKE:   Wema Bank Launches Leadership School to Re-skill and Groom Leaders

“So, I, Chief Osoba and Chief Akande and Asiwaju went from our side. My people, what I heard there, what Obasanjo said, the victory of Asiwaju is assured.

“Obasanjo spoke at length and we were all happy. He embraced our candidate like a brother, gave him a pat on the back, and prayed for him copiously,” he said.

His former vice president, Atiku Abubakar, who is running for president on the Peoples Democratic Party (PDP) platform, has yet to consult with him since emerging as the PDP candidate.

YOU MAY ALSO LIKE:   2023: Obasanjo Reveals Presidential Aspirants Who Can Fix Nigeria
Gave Him A Pat Gbajabiamila: ‘Obasanjo Hugged Tinubu Like Brother Prayed For Him’ 2022-08-19
Oluwasegun Adesuyi
Share

Tags Gave Him A Pat Gbajabiamila: ‘Obasanjo Hugged Tinubu Like Brother Prayed For Him’