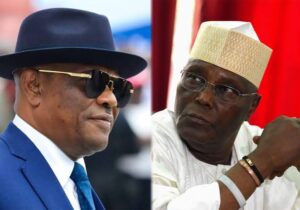 The presidential candidate of the Peoples Democratic Party (PDP), Atiku Abubakar, has reportedly cut down to three his delegation to meet with Governor Nyesom Wike and his allies over the crisis rocking the opposition party.
Recall that the PDP plunged into crisis after Atiku overlooked Wike and picked Governor Ifeanyi Okowa of Delta State as his running mate for the presidential election.

The Rivers governor, who came second in the party’s presidential primary, has refused to openly back the presidential ambition of Atiku.

Some top members of the party who are unhappy with the PDP leadership have also joined Wike in calling for the resignation of the party’s National Chairman, Senator Iyorchia Ayu.

Atiku and Wike had agreed to set up a 14-member committee to meet and iron out differences for peace to return to the opposition party.

But the committee to explore grounds for reconciliation between the two men failed to meet as scheduled on Monday.

Naija News understands that the meeting failed to hold due to a disagreement over the venue, with one faction proposing Port Harcourt, the Rivers State capital, while the other insisted on Abuja.

To prove his commitment to reconciliation, Atiku on Thursday night dispatched his three-member delegation to Port Harcourt.

YOU MAY ALSO LIKE:   2023: More trouble for PDP as Sanwo-Olu, Akeredolu, Fayemi, Other APC Leaders Visit Wike in rivers[Video]

A source in the delegation told Premium Times that it was well-received by Governor Wike’s people and that arrangements were being made for the meeting tomorrow (Friday).

“We have received very positive signals from them, and we are confident more than ever before that this crisis will soon be resolved,” the source said.

On why Atiku cut the size of the delegation, the source said: “You know in matters like this, too many cooks can spoil the broth. It is an intra-party crisis, and Waziri believes that the reconciliation can be better done by a compact team.”

Previous Battle For Abia APC Governorship Ticket Shifts To Abuja Court
Next Gbajabiamila: ‘Obasanjo Hugged Tinubu Like Brother, Gave Him A Pat, Prayed For Him’