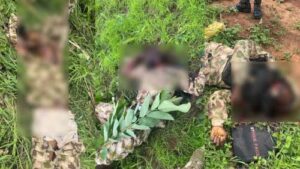 At least seven personnel of the Nigerian Army reportedly died in the late-night bomb explosion that rocked Jalingo, Taraba State capital on Tuesday, May 11.

Naija News had reported earlier that citizens of Taraba State were thrown into fear on Tuesday night after a loud sound suspected to be a bomb explosion was heard in Jalingo.

The explosion is said to have occurred a few metres away from the military base located in the Jalingo metropolis.

A source had told Daily Post that the explosive was thrown into the military base by a passerby.

An updated report on Saharareporters, however, revealed that seven soldiers died in the attack.

The report had it that gunmen suspected to be terrorists launched an ambush on the convoy of the commanding officer of the 93 Army Battalion in Takum.

The media organisation quoted military sources as saying that the Brigadier General was on his way to Jalingo on Tuesday when the incident happened.

One of the sources said the “whereabouts of the senior military officer and his orderly are unknown hours after the attack”.

YOU MAY ALSO LIKE:   I Am Tired Of Praying For Buhari, He’s Been Lying To Nigerians – Muslim Cleric

“Brigadier General was in the convoy”, said another source who was unsure of the situation.

He, however, confirmed that his official vehicle was among those attacked.

The latest attack on the Nigerian Army men came barely two weeks after some fighters of the Islamic State West Africa Province (ISWAP) and Boko Haram in Borno State were neutralized by troops of the Nigerian Army (Operation Desert Sanity).

YOU MAY ALSO LIKE:   Alleged Kidnap: Court Places Ameerah On 1 Year Psychiatric Care

The Nigerian Army had disclosed that it killed the Amir (commander) and spiritual head of Galta, close to Mandara Mountain in the South of Borno.

The spiritual head of the terrorist group was killed during an operation around Manjo Ali Qere in the state.