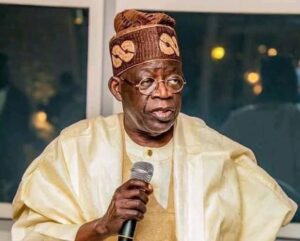 The campaign organization of the All Progressives Congress presidential candidate, Bola Tinubu has debunked the manifesto currently circulating online.
A statement signed by his Director of Media and Communications, Bayo Onanuga, disclosed that the manifesto making rounds on the internet is a merely drafted proposal and suggestion on programs Tinubu would implement when elected in February 2023.

Bayo Onanuga said Tinubu and APC are currently working on an all-embracing manifesto that will inspire the confidence of Nigerians and it would be presented to the public before the official campaign begins in September.

The statement read: “The document is currently being circulated via social media platforms in his name, despite the TCO informing editors that it is merely a draft proposal and suggestions on the programme he should implement, when elected in February 2023. A manifesto is a more serious document.”

“The TCO hereby formally dissociates Asiwaju Tinubu from the document”

“Asiwaju Tinubu, in consultation with the party, experts in various fields and a broad section of the populace, through an empirical and evidence-based approach, is working on an all-embracing manifesto that will be presented to Nigerians when it is ready before the official campaign begins in September”.

“I want to place it on record that the manifesto being circulated via social media platforms and already published by a section of the mainstream media is not the official Manifesto of Asiwaju Bola Tinubu and All Progressives Congress for 2023 general election.”

“While our presidential candidate appreciates the spirit and efforts of his associates that produced the document being passed around mostly on WhatsApp, we want to clearly state that the document is an unofficial document and Tinubu can not be held accountable on any of the issues raised in the document.”

YOU MAY ALSO LIKE:   When will Seplat Chairman, ABC Orjiakor Pay His Debt?

“The Presidential candidate and APC are currently working on an all-embracing manifesto that will inspire the confidence of Nigerians. When the official policy document of Tinubu is ready it will be formally presented to Nigerians and our candidate will be in a position to defend every word that will be contained therein.”

“We appreciate the interest and enthusiasm of Nigerians to know about the programmes and policy options Asiwaju Tinubu will pursue in government when elected. He is a tested and experienced leader who will bring his knowledge and expertise to run a government that will meet the aspiration and yearnings of our people across every sector”