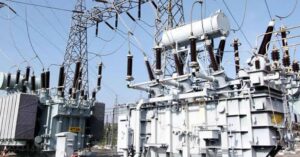 It is the sixth reported collapse in 2022.

The government blames the collapse on poor management and low gas supply.

The Jos Electricity Distribution Plc informed its customers through its Facebook page on Sunday about the interruption in Electricity supply.

“The Management of Jos Electricity Distribution Company Plc wishes to inform the general public that the current outage being witnessed is a result of system collapse,” the head of Corporate Communication, Friday Elijah, said.

“We hope to restore supply as soon as supply is restored,” he added.

The Enugu Electricity Distribution Company Plc based in Enugu said, “EEDC wishes to inform her esteemed customers of a system collapse which occurred at 6.49pm this evening, Sunday, 12th June, 2022.”

Mar 15, 2022
The statement signed by spokesperson Emeka Ezeh said as a result of the development, all outgoing feeders were out and this has affected supply to its customers in Abia, Anambra, Ebonyi, Enugu, and Imo States.

“We are on standby, awaiting further information on restoration of supply from the National Control Centre (NCC),” he added.

Also the Eko Electricity Distribution Company said, “Dear Esteemed Customer, we regret to inform you of the system collapse from the National grid. This has affected our entire network and impacted our ability to deliver optimum service.”

“Please bear with us as we are working with the Transmission Company of Nigeria partners on a swift resolution. Power Outage In Our Franchise Due To Grid Collapse,” it concluded.

The spokesperson of the Kaduna electricity distribution company, Abdulazeez Abdullahi also said
“We regret to inform you that the power outage being experienced in our franchise states is due to System Collapse of the National Grid. The collapse occurred at about 18:47 pm this evening hence the loss of supply on all our outgoing feeders,” the notice said.

YOU MAY ALSO LIKE:   Saraki, Gbemi Reacts As Library Named After Their Father Is Demolished

The company promised consumers that power will be restored as soon as the National Grid is powered back.

“Please be informed that the current power outage is due to a system failure from the National Grid. The system collapsed at about 6.49pm today 12th June, 2022, causing the outage currently being experienced,” the management of the Abuja Electricity Distribution Company posted on Facebook.

“We appeal for your understanding as all stakeholders are working hard to restore normal supply,” it said.