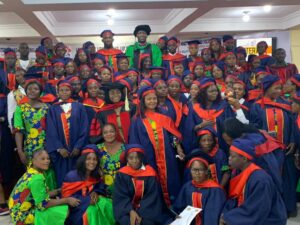 The Lekki Adult Literacy And Vocational Centre has held its inaugural graduation ceremony and matriculated about 60 learners.

This was done in an event held on Saturday, 11th of June, 2022 to celebrate the learners and to also kick off the ‘Kick Illiteracy Out Of Lagos’ campaign, an initiative of the conveners of LALVC focused on repairing the faulty foundation of the hopeless by giving them education.

The event had the representative of the Lagos state government, Honourable Tokunbo Wahab, the special adviser to the LASG on education well represented by Mrs Seriki Olayemi, the chairman of Ibeju-Lekki local government, Hon Abdullahi Sesan, a former minister of trade and investment, among a host of many others.

According to coordinator, Deacon Joe Mbulu, the program has a multiplier effect because it will help kick illiteracy out of Lagos. He noted that the program is a 9-month program certified by the Lagos state Educational board while explaining that in the year 2021/2022, over 60 learners had their matriculation and only 25 people were able to pass the examination set by the Lagos state government, he also made it known that over 60 are getting matriculating for the 2022/2023 session.

‘’This is a very good programme and in most cases, it gives opportunity to those who didn’t have opportunities to go to school when they were young. Lagos state on its own part is really trying, all we need is collaborating so by establishing this kind of Centre, they are collaborating with the Lagos state government and in turn, we give learning materials and pay two facilitators.’’

Also, the chairman of Ibeju-Lekki local government, Hon Abdullahi Sesan applauded the initiative, stating that he was excited seeing that hope has been restored for some who didn’t have the opportunity to have a formal education while growing up.

YOU MAY ALSO LIKE:   Ekweremadu’s Daughter Appeals For Kidney Donor As Father Spends 82nd Day In UK Prison

He advised the graduating students to continue pushing and not look back while calling on organizations to also embrace the need to kick illiteracy out of their communities.

‘’We must congratulate those that have benefited from this initiative and I want to commend the people behind this, they have taken a major step to kick illiteracy out of the community and of course, those that benefited will see a better future. We can see the excitement in their faces, I was happy myself because being in government makes us see the damage illiteracy has done to our community.’’

‘’I advise those graduating not to look back because the foundation has been laid, they have been empowered with knowledge. I call on Lagosians, organizations, and religious organisations to support the government in fighting illiteracy in the state.’’

One of the matriculating students, Gerrard Abiodun made it known that when he joined the programme, many criticized him because he was a bit educated but kept at it because he wants to be a better person that he is presently.

‘’To me, this programme is very good, when I first joined, they told me how they were, they were not able to read but at this moment, they can write and spell on their own, RCCG needs reward for this.If there is anything I want to tell the organizers is that God will continue to bless them, this is the kind of thing we need in the state.’’

‘’This programme isn’t something you should be ashamed of, I’m a teacher and I have been educated but I have never been a graduate. I have seen people criticizing me for coming here but when they see the end result, I know they will celebrate with me.’’

Another matriculating student, Williams revealed that the initiative is a privilege for him in order to repair his faulty condition. He explained that if illiteracy is kicked out of Nigeria, insecurity will not be an issue meaning RCCG CTL province 20 has taken a bold step to end insecurity in Nigeria.

‘’It’s a privilege for us to have this Centre to repair our faulty condition, some of us didn’t have the opportunity earlier but with this programme, we have gotten an enabling environment where we can improve ourselves. I expect to become a better person, have a better education and the same way I have received it, I should replicate and give back to the society.’’

‘’Nigeria is suffering a lot because of illiteracy and many issues we are having is lack of education like banditry, insecurities but by educating myself, I have the opportunity to return what I have received to the society and make Nigeria a better place to be.’’

‘’I want to say a big thank you to RCCG LP 20, it’s a big project but God on our sides, we are able to overcome and move forward.’’

The Lekki Adult Literacy Centre And Vocational Centre launched its kick illiteracy out of Lagos state campaign in a way to empower and restore hope to Lagosians who are interested in learning in order to be valuable to their societies.

The movement, which is one of the Corporate Social Responsibilities (CSR) of the Redeemed Christian Church Of God (RCCG) LP 20 started in 2020 out of the need to bridge the gap between the elites and ordinary populace who are disadvantaged for lack of education.