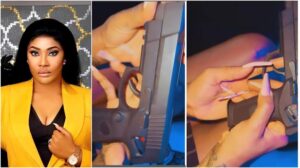 Popular actress-turned-singer, Angela Okorie has stunned her fans after showing off a newly acquired pistol loaded with bullets a week after dozens of Christian worshippers at St. Francis Catholic Church, Owo in Ondo State were brutally murdered by gunmen.

Naija News reports that the actress and mother of one showed off her pistol on her verified Instagram page on Sunday, June 12, a week after gunmen invaded a Catholic church, throwing explosives and shooting many worshippers dead on Sunday, June 5, 2022.

In the video shared on social media, Angela was captured cocking her gun whilst asking her fans how their Sunday service went. The mother of one had gone to church all knitted and prepared.

Sharing the video, she captioned it; ‘” HAPPY SUNDAY Fam. How was church today? #legitqueen”

Recall, that perpetrators who attacked the Christian worshippers at St. Francis Catholic Church, were said to have fled the scene immediately after they carried out the killing, leaving many people dead.

The National Emergency Management Agency (NEMA) reported that 11 children and 30 adults were admitted to the Federal Medical Centre in Owo’s emergency wards.

The occurrence sparked a national outcry and was widely condemned in Nigeria and the international community.