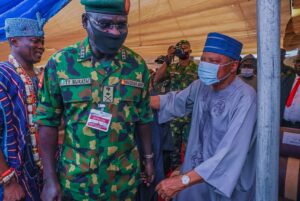 The Chief of Army Staff, Lt Gen TY Buratai has defended President Muhammadu Buhari’s policies and efforts at ensuring that the nation enjoys peace and security.

The military Chief made this known while speaking at the Osun State Givernment House in Osogbo during his visit to the state to commission a bailey bridge and hospital constructed by the Nigerian Army Engineers in collaboration with the Army HQ Department of Civil- Military Affairs for Owu Kuta and Asamu communities in the state.

The Osun State Governor, Gboyega Oyetola had hosted Buratai in September 14 after the commissioning at Owu Kuta.

He said some Nigerians, whom he described as enemies of the country, have wrong perceptions about the Buhari led Federal Government and have been using the social media to spread this fake and unfounded projections.

He debunked the rumour that there might be famine in Nigeria owing to the security challenges in the North East and appealed to Nigerians to ensure they verify news before believing it.

Lt Gen Buratai was reacting to the goodwill message of Lt General Alani Akinrinade (rtd), a former Chief of Army Staff and Chief of Defence Staff, at the State Government Banquet Hall.

In his message, Akinrinade commended the COAS for building a bridge at the Osun River that links Kuta, Ikoyi and Ede Communities of Osun State. He also appreciated Buratai for graciously complimenting the efforts of the State Government who has given public health care priority in the development of the State.

He asked Buratai to look into some matters which he said are rampart on social media and that have throwing him into distress, of which he wnated Buratai to convey to the President Buhari.

The first matter according to him “is the pervasive public perception/believe (which does not necessarily represent the true position of Mr President) that the President was an ‘ethnic bigot, an irredeemable religious fundamentalist that firmly subscribes and promotes the possibility of his ethnic Fulani to take over the country, which was the reason why he does not interfere in curbing the brigandage of the Fulani herdsmen.

Furthermore, the elder statesman concluded that going by the perception or belief of the public, the President has performed woefully in the fight against the Boko Haram terrorists and that he cannot rise to the occasion when it comes to reflecting the heterogeneous composition of the country in appointments to sensitive positions in his government.

He therefore called on the president to read the riot act against the perpetrators of this mischief.

The second matter according to the former CDS is that sometimes, he hears that there are Fulani mercenaries from outside Nigeria being sponsored by some Nigerians. From what he heard, the situation is so dire that in collaboration with unexpected bad weather this year, a famine is imminent as the country is “already burrowing grains from the ECOWAS countries” because farmers are being forced to abandon their farms”.

He therefore suggested that the President should “read the riot act to the Fulani herdsmen” adding that it is not acceptable for any foreigner by whatever name to enter Nigeria illegally and molest Nigerians because “they are not welcome”.

According to General Akinrinade, the country should not, by mistake of omission or commission allow Nigerians to degenerate to self-help which is a sure route to anarchy and perdition that will not go away”.

YOU MAY ALSO LIKE:   Breaking! TB Joshua’s Prophecy About British Royal Family Comes To Pass

The former military Chief thereafter accepted that these difficult matters cannot be addressed in abstract as the whole buck stops on the President’s table. He therefore suggested that the President “needs to shape up, read the riot act to our people and enlist them in unwavering cooperation to participate fully in the redemption of their country “.

According to him, since he was sure the President is aware of the hues and cries from all corners and crannies of the country for secession as if the country has not been there before, there is a need for him to “stand on his table against the motley crowd of advisers and take a firm stand on the restructuring of the country, physically, politically, economically and socially”.

He also advocated for the reorganization of the Armed Forces “which is long overdue and over flogged as if it is such an impossibility because it is what is required to move the country out of the doldrums into modernity and cannot afford to pass it on”.

“We may end up without a country, as no country has been known to survive two civil wars. He (Buhari) can take better counsel in the appointment to the sensitive parts of his government. There are capable loyal men and women from every village in the country,” Akinrinade advised.

Reacting, Buratai thanked Gen Akinrinade (Rtd) for identifying the negative impacts of the social media in spreading falsehood and fake news in the country.

YOU MAY ALSO LIKE:   NIGERIAN ARMY TAKES GENDER ADVOCACY TO SOKOTO

The COAS also said the retired General has identified the wrong perceptions being projected by the enemies of the country noting that people should not rely on social media reports which are mostly fake and largely unfounded.

He further advised the Retired General on the need for statesmen of his caliber to take the pains of verifying information before making conclusions on them.

On the perception of likely famine in the country this year, the COAS Lt Gen TY Buratai assured the gathering that there is no cause for alarm as there won’t be any famine in Nigeria because farmers have gone back to their farms.

Gen Buratai said “I just left the North West where Exercise SAHEL SANITY is ongoing and many farmers have so far returned to their farms. Our troops are providing security to farmers and the bandits are being dealt with decisively. From all indications we are expecting a bumper harvest this year”.

Gen Buratai further informed that the Nigeria Army and other security agencies are doing everything possible to ensure that the terrorists and bandits are never allowed to cross over to the southern parts of the country.

He also observed that the issue of restructuring is a political matter and he only commented on security issues raised by the retired General. He further reiterated the apolitical stance of the Nigeria Army.

The Army boss then implored all to continue to cooperate with the Federal Government and support the ongoing efforts to rid the country of all forms of insecurity. 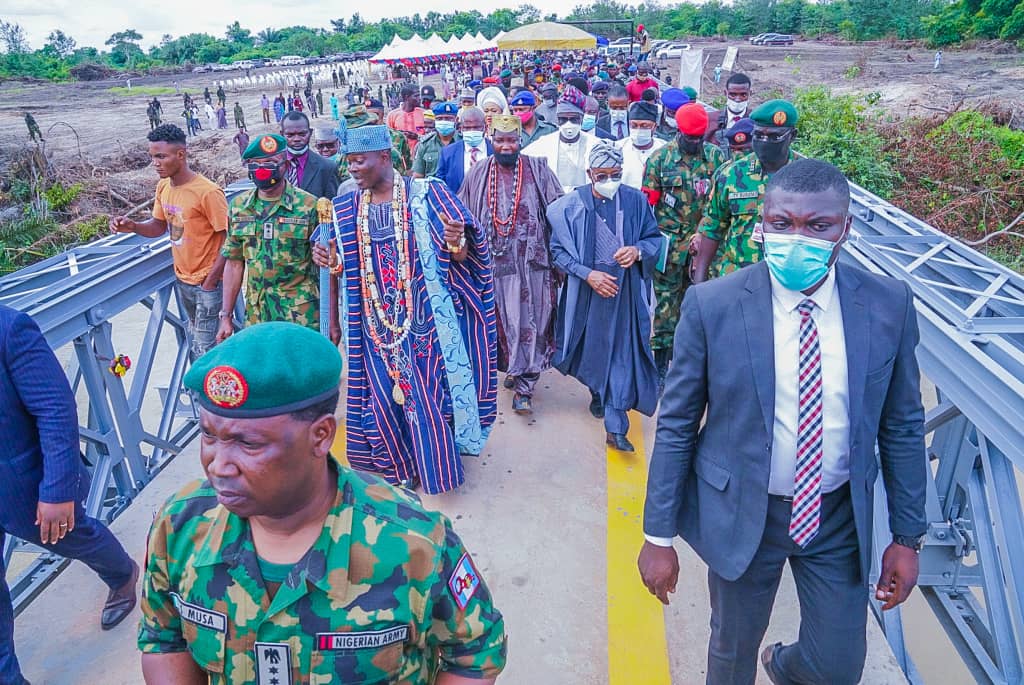 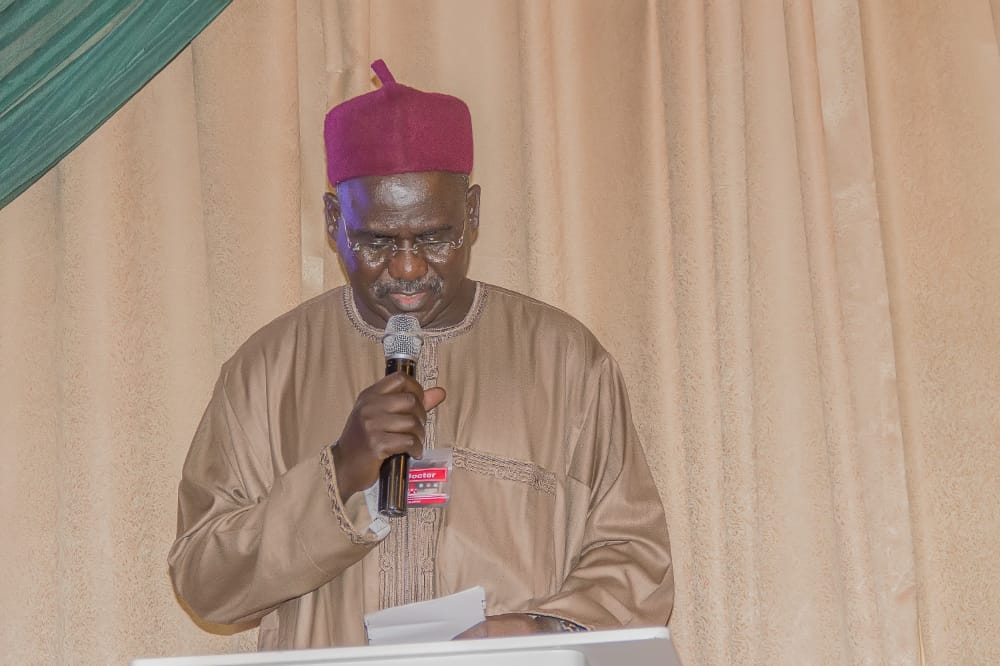 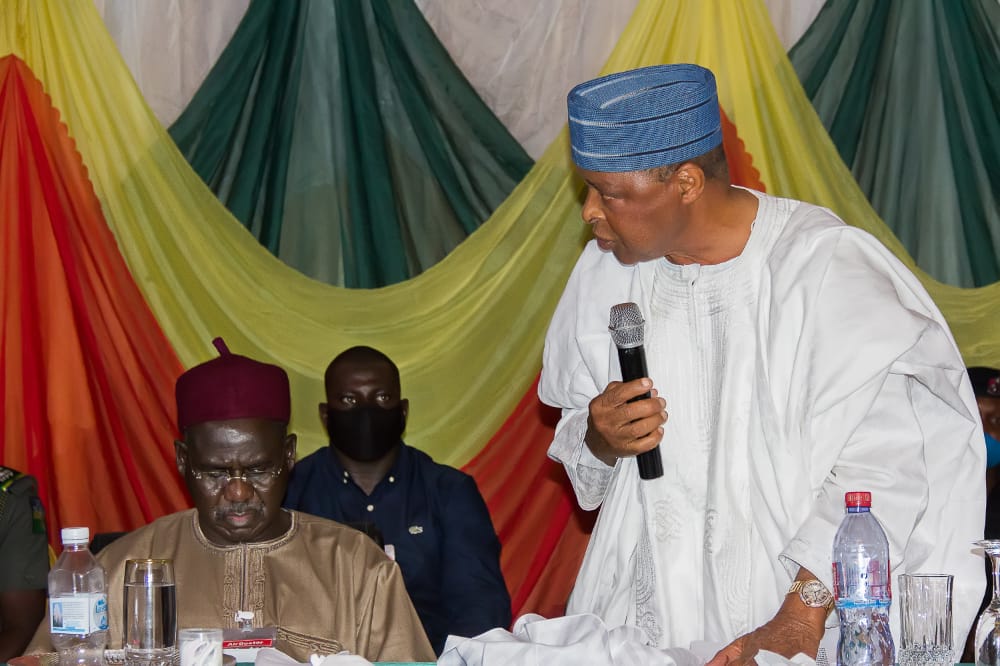 @societygazette
Previous Remembering Ize-Iyamu’s Class Act at Debate by Derinsola Simeon
Next Edo 2020: Before You Cast That Vote Today by Olusegun Odulana-George