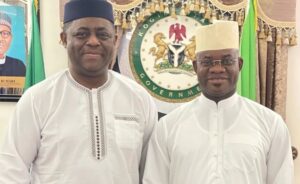 The images are coming a day after FFK defected to the ruling All Progressives Congress, APC.

Although its currently unclear the source of the images, they have since gone viral with many criticizing the pair. It was earlier reported that FFK’s defection has generated so much controversy because he was one of the major opposition figures in the Peoples Democratic Party, PDP.

Fani-Kayode, who gained a lot of popularity for his opposition work, faced serious backlash over his decision. Popular Islamic cleric, Shiekh Gumi described him as the ‘Judas of Oduduwa’ while his former friend now political foe, Deji Adeyanju described him as ‘Unstable’ and ‘Unprincipled’.

However, Bello has since indicated interest in contesting for the Nation’s top seat in 2023. He has even begun consultations and is set to face other top contenders for the position.

YOU MAY ALSO LIKE:   Crime has gone to “next level”, we need technology to combat it - Ganduje Tells IGP
Confusion As 2023 Campaign poster of Yahaya Bello Fani-Kayode emerges Online 2021-09-17
Oluwasegun Adesuyi
Share